Advertisement
The Newspaper for the Future of Miami
Connect with us:
Front Page » Top Stories » Downtown Miami filled with cautious optimism as recovery begins 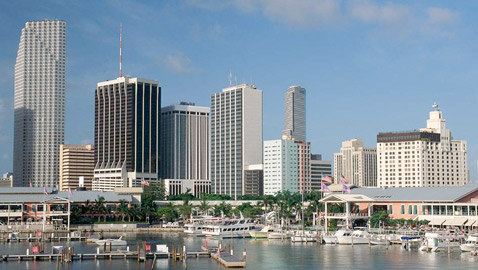 Downtown Miami has not been Teflon during Covid-19. Still, there is cautious optimism the urban core could be seeing a return to normal, and some economic development opportunities could emerge from the pandemic.

The City of Miami has begun its reopening, and by extension, downtown Miami is starting to liven up again.

Shopping hubs like Brickell City Centre and Bayside Marketplace are in full swing. The city has launched its restaurant recovery program, which will allow restaurants to open into the public sidewalks, on-street parking spaces and closed traffic lanes, which helps the smaller eateries in the area that might struggle with social distancing.

The Downtown Development Authority has been helping downtown businesses during the pandemic. The authority created the Go Local Campaign to help area restaurants that were losing a cut of their revenues through third-party delivery services. The authority also created a small business taskforce to help businesses navigate all the federal and state grants.

The authority has also created a recovery committee to discuss how to quickly get the downtown engine flowing as the area opens. At last month’s meeting, however, the authority shared stark numbers: at least 1,600 jobs had been lost in the area.

But at a recent meeting last week, a positive trend was brought into focus.

The Downtown Development Authority has been working to lure businesses from across the country for a while now, especially the Northeast from high-tax states to downtown. At a recent meeting, board members and authority staffers said there were positive indicators that businesses might still be interested in coming to Miami.

Even during this crisis, the authority has held meetings with hedge funds and private equity companies from New York City and Chicago that are looking to establish headquarters or satellite offices in Miami. Also, a technology consulting company from Boston has said it will be moving to Miami and will hire 15 employees, doubling its size.

“This is a terrible and awful time for a variety of reasons, but Miami through geographics, through our business community and how everything’s structured, we’re just really well-positioned to receive a lot of these inbound people,” said Kevin Ruiz, authority senior manager of business development.

Board Member Danet Linares, the vice chairman of Blanca Commercial Real Estate Inc., said that rent rates of class A office space have remained stable. While some businesses are looking to downsize their office space, that has led to subleasing opportunities. She said it was ultimately a net-neutral market for office space.

Downtown Miami is the densest area in the city, with approximately 100,000 residents living in the area. Millions more flock to the area for work or vacation. Higher density has been considered to be one of the factors that have contributed to the spread of the virus in some of the Covid-19 hotbeds such as New York City.

Development Authority Executive Director Christina Crespi said, however, that the city and the county have quickly responded to the threat of the virus, and the downtown community for the most part, has taken Covid-19 seriously, adhering to the guidelines. However, she said that it is important that city residents and businesses continue to follow directions, with the threat of Covid-19 still very much in the picture.

“I think moving forward, it’s always going to be a concern,” she said. “We would hate to have another issue where as things open we’re at a situation where we’ve got to be back at square one.”

For residents of downtown Miami, there’s been a lack of clarity on what to do or not do, said Amal Solh Kabbani, president of the Downtown Neighbors Alliance.

She said the majority of residents in the downtown area live in apartment buildings, and homeowners associations are making the decisions on how to open up. But the county and the city have not addressed many of the aspects of life in residential towers, such as elevators, mailrooms and other community spaces.

That came with a cost, Ms. Kabbani said, as homeowner associations had to lawyer up to navigate the guidelines to avoid getting fined.

“It was hell for the better part of four weeks,” she said.

However, she said she believes downtown Miami is ultimately resilient, and while the area’s growth might stagnate for a while, things will eventually boom again.