Advertisement
The Newspaper for the Future of Miami
Connect with us:
Front Page » Business & Finance » Timing troubles some as Flagler Street revamp starts 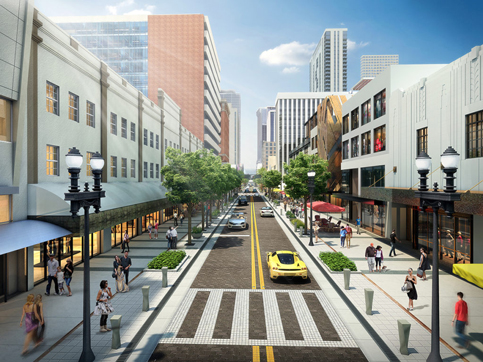 After years of starts and stops, contractors broke ground last month on the first phase of a long-awaited project that will revamp downtown Miami’s Flagler Street. But some business owners say that after years of waiting, city and county officials could have spared a few more months before putting shovels in the ground as they are still recovering from the economic effects of Covid-19.

“One of my goals as chairman of the Miami Downtown Development Authority,” said City Commissioner Manolo Reyes via email, “is to ensure that this project restores Flagler Street back to its glory days when it was the pulsating heartbeat of the city, and to achieve that as soon as possible.”

“The first section is expected to take nine months and the entire project is about 30 months long,” Hector L. Badia, with the City of Miami’s Office of Capital Improvements, said in an April meeting.

Sandra Cortes, owner of Alberto Cortes Cosmetics and Perfumes, said the project may have come too soon after covid for many business owners on the street. Her shop, the oldest perfumerie in Florida, opened in 1967 and has been in its current location of 272 E Flagler St. for 15 years.

“Beautifying Flagler is a great thing,” she said, “but the timing was not great.” Businesses, she said, are still recovering from Covid-19 and lower levels of tourism, and all the construction could make finding businesses on the street difficult for customers. With Flagler closed down, she said, they have to make a point of seeking out the businesses, and some clients may see the construction and dust and assume they are closed.

“With covid our sales have already suffered,” said one business owner at an April 21 community meeting. “How do you expect small tenants to recover and pay ever-increasing taxes?”

“I don’t see this as a good time to do this,” another submitted a comment saying. “It was a disaster last time. Covid has drained our resources.“

Ms. Cortes said that while the development authority had promised initiatives to help business owners on the street, she hasn’t yet seen any monetary or branding improvements.

“Before the end of this week,” Mr. Reyes said, “we are installing signage to help pedestrians identify open stores and walkable pathways.” Additionally, he said, side streets and alternative paths have been opened to enhance accessibility.

Throughout the construction, he said, the development authority will be holding events near the affected areas to encourage commerce, such as live music. It will also begin “Flagler Fridays,” a social media series that will highlight businesses on the street, and is offering through a partnership with Miami Dade College a free 12-month course on “Digital Transformation for Small Businesses.”

The authority, said Executive Director Christina Crespi, is allocating funding for a relief grant for Flagler Street businesses impacted by the construction. The total allocated for this relief grant will be determined this month, and could be reviewed by the board as early as June 25.

The authority, she said, is also advocating to obtain funding from Miami-Dade County and City of Miami from the funds received from the federal American Recovery Act, which would also go to Flagler businesses impacted by the construction.

Gary Ressler, a board member of the authority and owner of the DuPont Building on Flagler Street, said he is excited about the project and that a revamped street will help him bring in higher-quality tenants.

“My goal is to ensure that the project remains on time and within scope,” he said. Communication with the contractors has been essential, he said, and weekly and biweekly meetings are well-attended by stakeholders and business owners. The project, he said, is being funded by the city and county, as well as contributions from property owners on the street.

‘The goal here is to create a core for tech and innovation equipped with all of the factors that make up a sustainable ecosystem – art, entertainment, fashion, technology and more. We are not just doing real estate development; we’re reinventing the Flagler District as the economic engine of Miami,” said Moishe Mana, who owns 60 properties spanning over 1.3 million square feet in the Flagler District.

“For too long,” he said, “construction has been looked at as a bad thing. Downtown, we’re taking this time to create the things that Miami desperately needs – high-paying jobs, facilities that attract successful companies, and an ecosystem that helps everyone, not just the wealthy. We need to focus on long-term transformation.”

Mr. Mana helped fund the project by investing in an extended master plan, and said he’s “working closely with city officials to ensure the Flagler District receives the proper resources.” According to a spokesperson, he successfully lobbied the county and city to increase funding for the project from $13 million to $20.5 million.

One Response to Timing troubles some as Flagler Street revamp starts