Advertisement
The Newspaper for the Future of Miami
Connect with us:
Front Page » Real Estate » Downtown Development Authority big on events, not development 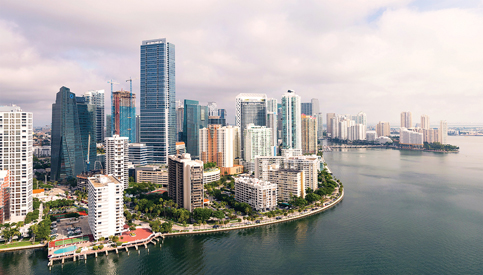 The Downtown Development Authority say downtown Miami has been quiet too long. As the pandemic is receding, many plans are in place to see downtown become alive again. The fun, the authority says, begins on a revamping Flagler Street.

Marta Viciedo, the co-founder and executive director of Urban Impact Lab, has four events planned for 2021-22. “Now is the time. We need to start now, and not wait on construction,” Ms. Viciedo told the authority’s board meeting last week.

The Flagler Street revamp project has been delayed for years, but updates finally began in early May. The street is to have a European design with curbless sidewalks to creative a festival-style boulevard. It is planned to be pedestrian friendly.

“We’ll have to be more aggressive in promoting events and festivals as we’ll have more visitors,” said Manolo Reyes, the Miami city commissioner who is chairman of the Downtown Development Authority. Traffic will be blocked for any festival or event, he said.

The Urban Impact Lab is beginning its social rejuvenation plan with an event called “Street Basel” in the early fall, Ms. Viciedo said. This will allow people to take over the streets by infusing walls of buildings with digital art, she said, and people will be able to project huge figures of art on walls on Flagler Street to connect the shops in the district.

The next event is “Miami Masquerade.” To be held Nov. 1, it’s to be a celebration of both Halloween and Dia de Muertos, or Day of the Dead. It is to celebrate all the cultures in downtown Miami with colorful art representing the fall season, Ms. Viciedo said.

The “Spring Spice Market” in early spring will be a “foodies paradise,” she said, because it will be a local farmers’ market with food pop-up stands.

Finally, “Holi Flagler” at the end of spring is traditionally an Indian celebration, Ms. Viciedo said. It is a festival of colors, music and life and would be, in Miami’s style, celebrating more than just one culture, she said.

The Urban Impact Lab is passionate about bringing culture and energy back to downtown Miami after the pandemic, she said. The development authority agreed, voting to spend $90,000 to support the Urban Impact Lab’s plans to get people on the streets again to see that businesses are open.

“Flagler Street is supposed to be for festivals, but we involve businesses,” said Eileen Higgins, authority vice chairman and the county commissioner for the area.

“We can do as many festivals as we want on Flagler, but without redevelopment, we are going nowhere. We have not seen requests for permits,” Mr. Reyes said.

The development authority, he said, is determined to discover what is holding businesses back and how it can help. The businesses could be afraid, Mr. Reyes said. The authority now is considering new committees that will focus on helping businesses recover.

“I have seen a lot of projects, but not anything adding to the city. We haven’t received any permits. I’d like to see a committee to get that going… without physical development we go nowhere,” Mr. Reyes said. Miami Today reported in June that businesses say they are still recovering from covid and are not ready to have construction surrounding their businesses.

The Flagler Construction Relief Grant Program planned to give $5,000 per business that qualifies as needing it because of construction and covid damage. About 44 businesses qualified. “We agreed on $300,000 total. I asked for more for the total grant, but we agreed on $300,000,” Mr. Reyes said. However, this was deferred because the grant does not directly mention covid, he told board members. The $300,000 could be wasted if it was not carefully reviewed with an American Rescue Plan attorney, Mr. Reyes said: there must be nexus to covid.

More is happening socially downtown than Flagler Street recovery. The development authority approved a sponsorship grant of $75,000 for the downtown events that will be happening around the Orange Bowl, Christina Crespi, executive director, said. The College Football Playoffs semifinal game will be held in Hard Rock Stadium, home field to the University of Miami Hurricanes and Miami Dolphins, on Dec. 31.

With covid receding, visionaries are energetic and passionate about their plans to bring life back to downtown Miami. “People need to be re-acquainted with downtown,” Mr. Reyes said. “I am for all ideas that bring downtown Miami back to life.”

2 Responses to Downtown Development Authority big on events, not development