Advertisement
The Newspaper for the Future of Miami
Connect with us:
Front Page » Communities » Cost of Flagler Street beautification rises millions 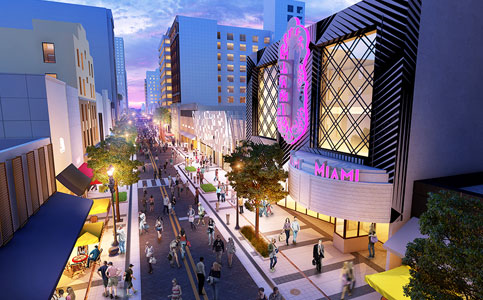 The plan is a curb-free, more pedestrian street with European style. But first work beneath the street must be done. Asphalt had to be removed and gas lines installed by TECO Gas Co. working with Lanzo Construction. They finished early, in only three days in August.

But the project hit a bump in the road with the next step, Florida Power & Light laying cables for Flagler’s electricity.

“FP&L can’t use machinery to do their work because there are too many water lines and gas lines,” Mr. Reyes said. “I went and inspected it, and it has to be done by hand because of all the connections in the street. But they are working hard and fast. We are very much on top of it, and not letting it hold the Flagler businesses back.”

The FP&L mishap added $5 million to the original $27 million budget. “We are well covered, and we are going to have to use those funds as efficiently as we can,” he said. “I don’t want to waste money. The expenditures will be to benefit businesses and draw people into the area.”

“I hope we keep it moving as fast as they’re moving now. The contractors know that our main goal is to rebuild the street in the shortest time possible,” he said. “We don’t want another First Street fiasco. A couple years ago, Flagler and First Street Southeast took forever. It was so unfair. You didn’t see anyone work for days and days. Businesses went bankrupt, and I told contractors that if that happened, there would be consequences.”

One Response to Cost of Flagler Street beautification rises millions