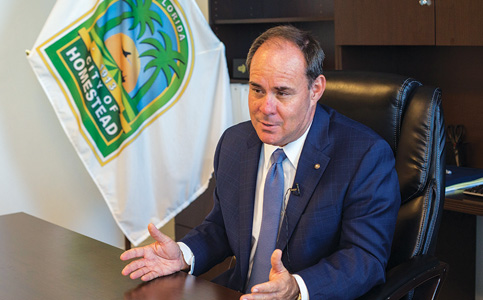 Few serving in public office in South Florida can claim to have deeper hometown roots than Steven Losner, the new mayor of Homestead.

A fourth-generation resident of the second-oldest city in Miami-Dade County, Mr. Losner’s family has lived in and contributed to Homestead for close to a century, so much so that a park in the city’s historic downtown bears the family name.

“We’ve always been involved, not necessarily politically but as community builders,” he said. “It’s always been about making Homestead a better place.”

Growing up around community leaders made his own move into local politics something of a natural progression, he said.

In 2001, he was elected to the Homestead City Council. Four years later, he was re-elected without opposition. But until this year, when he won the mayoralty, he’d been out of public office for more than a decade.

What brought him back, he said, was a desire to improve the city’s standing and reputation by addressing key concerns that will impact its future, from quality housing, cleanliness and jobs to bringing more dining, retail and entertainment options to the area to keep residents there on weekends and lure more outsiders to the area.

“We’ve had this perception as being the stepchild of the county, and in some regards we still are,” he said. “But there’s so much untapped potential here.”

Mr. Losner sat down with reporter Jesse Scheckner. The interview, recorded by Jahmoukie Dayle, can be viewed below.