Advertisement
The Newspaper for the Future of Miami
Connect with us:
Front Page » Profile » Matthew Anderson: Departs from banking to head interfaith organization MCCJ 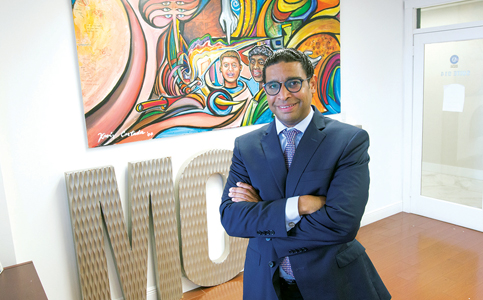 Matthew Anderson for years has been involved in local nonprofit work and philanthropy. Until recently, however, it was a passion to which he could never give his full attention.

In late May, the former banking and real estate professional crossed over from the private sector to the public sector to lead MCCJ, an organization aimed at uniting the Miami community through interfaith dialogues, inclusivity training, advocacy and conflict resolution.

Mr. Anderson, who was the MCCJ’s youngest chairman in its nearly nine-decade history, is also now the organization’s youngest-ever executive director.

As MCCJ’s de facto CEO, his responsibilities include overseeing management and staff, fundraising, acting as the face of the organization in the community and ensuring the support of its partners.

To that end, he said, he’s now at work developing a new strategic plan for MCCJ, which entails becoming better acquainted with stakeholders, informing donors and supporters of what’s happening with the organization and making sure staff are content, motivated and onboard with where things are going.

“Another piece of the puzzle is making sure our organization has the voice it deserves in the community,” he said. “It’s all about perception versus reality. We have been putting out an amazing product and have done amazing work. It’s important for the community to know about the work we’re doing and that our doors are open to help and partner any way we can.”