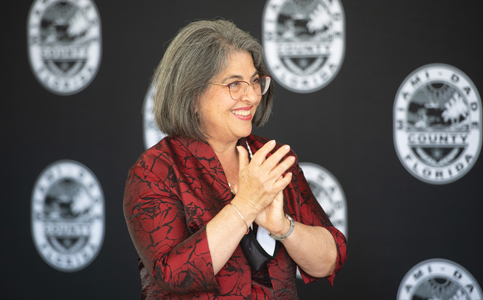 Before Daniella Levine Cava became Miami-Dade’s first woman mayor – before she won a seat on the county commission, her first elected public office, more than six years ago – she’d dedicated more than three decades of her life to nonprofit work, serving the county’s most vulnerable residents.

She moved to Miami in 1980 and joined Legal Services of Greater Miami, which provides free civil legal aid to low-income residents in Miami-Dade and Monroe counties. Five years later, she took over as legal director of Guardian Ad Litem, a court-run child welfare program.

Following leadership roles with the Florida Department of Children and Families and the Academy for Better Communities, an outreach program she founded with Barry University, she launched what would become Catalyst Miami, which today helps some 5,000 people yearly improve their financial independence.

Naturally, people often told her she should run for office. For a long time, she felt her contributions through her community work and advocacy were sufficient.

“But there came a point when it was necessary to shift the balance on the county commission so that advocacy would be effective,” she said. “I considered I could do it, so I had an obligation to do it.”

As a commissioner, she sponsored and successfully saw through impactful policies targeting the many challenges Miami-Dade faces, from environmental health and housing affordability to transportation and placing a greater emphasis on energy efficiency in county facilities.

Now being mayor charting the course of a massive organization with a $9 billion yearly budget, she said, provides her with opportunities to address those issues and myriad others in ways she couldn’t before.

“It’s rewarding and wonderful to have a broader scope of responsibility for the entire county,” she said. “I now have 29,000 people on my team who can execute on my vision to be more customer-serving, transparent and focused on equity, inclusion and resilience. I bring my values and priorities to the job and have the great opportunity to reshape the way we deliver services through that workforce.”