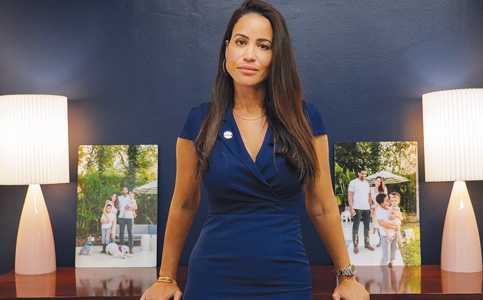 When Danielle Cohen Higgins became the newest member of the Miami-Dade Commission, she encountered a few pleasant surprises.

The learning curve that came with tackling the county’s myriad issues – from the airport, seaport and transportation to tourism, affordable housing and the future of agriculture in South Dade, the area she represents on the dais – was steeper than expected, though nothing the lawyer and community activist couldn’t handle.

What was must surprising, she said, was the camaraderie on the commission.

“I was joining a family,” she said. “I did not realize I’d have such wonderful relationships with my colleagues and great respect for them.”

Born and raised in Miami-Dade, Ms. Cohen Higgins is a stalwart believer in the county, which she affectionately calls “the French Riviera of the United States.” Even though she’s a native, she said she never takes it for granted.

“Its assets include not only our wonderful weather and beaches, incredible entertainment and arts community, and incomparable nightlife, but we have the most amazing people,” she said. “We’re such a melting pot, a community made up of immigrants who, even though we all come from different places, share a similar story of grit, determination and hustle. I’m proud of that. Our greatest asset, hands down, is our people.”