Advertisement
The Newspaper for the Future of Miami
Connect with us:
Front Page » Arts & Culture » Four-block-long street mural coming to Wynwood 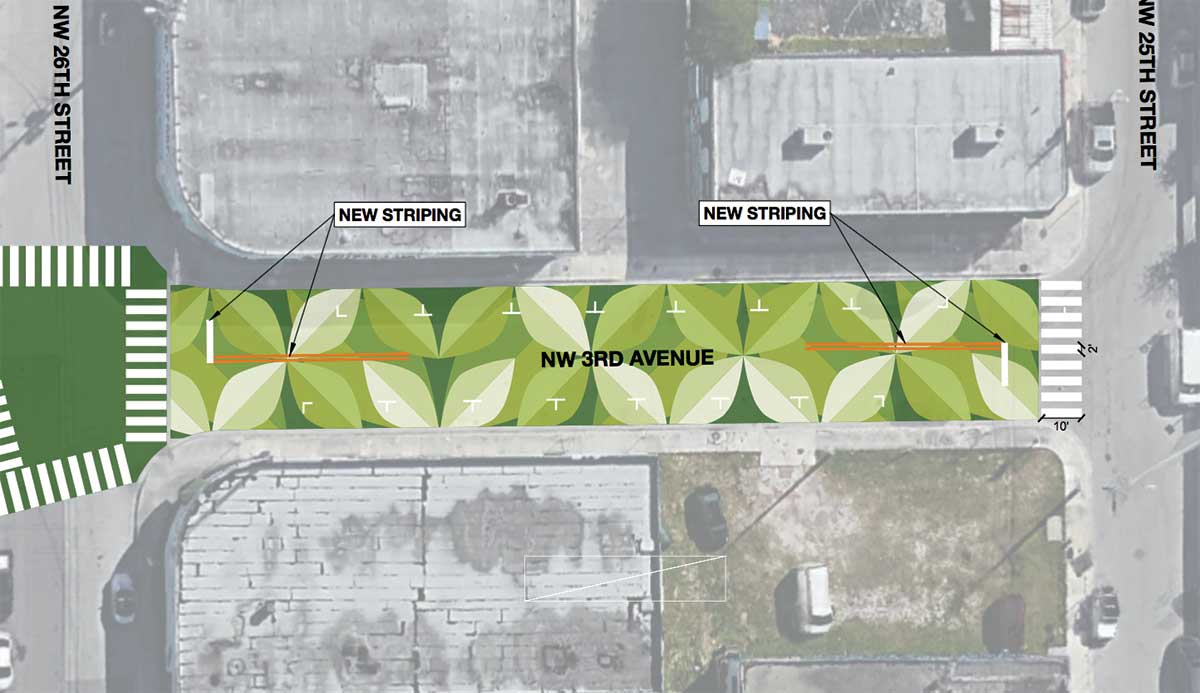 A mural spanning four blocks in Wynwood is expected to arrive next spring. The organization leading efforts to revamp Northwest Third Avenue plans to collaborate with 200-plus volunteers in either late February or March to bring the vision of two artists to life.

Street Plans Collaborative is overseeing the planning of Walk Wynwood. The county first held a competition called the Miami-Dade County Quick Build program about a year and a half ago. Funding from donors, such as the Knight Cities Challenge and New York-based nonprofit TransitCenter, is to cover material costs.

Another competition was later held to pick the design. Artists submitted for the sole reward of having their work displayed in Wynwood. The Latin American duo Sebastián Cuevas and Cristina Nuñez were the winners.

Street Plans Collaborative Principal Anthony Garcia is teaming up with the City of Miami, Miami-Dade County, the county Department of Transportation and Public Works and the Wynwood Business Improvement District to bring the piece to life.

The cost of the project is expected to range between $30,000 and $50,000. Mr. Garcia said. “I say between because as we get advanced in the project, we start to do the real budget in terms of the permitting costs. We’re doing things that Dade County and the City of Miami haven’t experienced before,” he said. “It might require more costs for permitting for police presence. That’s the real question mark.”

Owners on or near the site welcome the opportunity for what may later replicate Giralda Plaza in Coral Gables, a restaurant corridor that has blossomed with public art.

“The street has many restaurants that are opening soon and just as recently as a few weeks ago we had a meeting at the BID where I spoke with several of the restaurateurs who are finishing their projects and they are so excited,” Mr. Garcia said. “They know that that is going to bring another type of energy.”

Mr. Garcia said he expects to use StreetBond, a pavement coating, to seal and protect the artwork. Retouches every year are the norm with outdoor works and expected. The expectation is to show the BID, city and county officials a Giralda-style shared path street.

Mr. Garcia said, “It’s a proof of concept so that they see that streets are in many cases public spaces as they are transportation corridors.”

Besides the warm welcome from store owners, the location itself could not be better, says Mr. Garcia: “It doesn’t experience the same traffic volume as the other streets. It can still draw on the natural and artistic energy of the neighborhood. That way I think it’s the perfect candidate for this type of project.”

Mr. Garcia said he needs at least 200 volunteers to deliver the project within a week. Volunteers usually work four hours and he needs two shifts of 20 to 30 people per day.

He expects to call for volunteers in early 2019 on the Wynwood BID website. Work is expected to last a week.