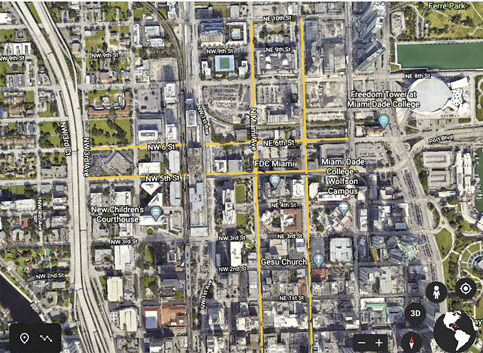 A micro-mobility infrastructure project half funded by electric scooter fees could be coming to downtown Miami, adding about three miles of protected bicycle and scooter lanes and laying the groundwork for more lanes in the future.

The green-patterned pavement lanes, which would come with concrete barriers separating them from traffic, would run from South First Street to Northeast 11th Terrace along North Miami Avenue and Northeast First Avenue, and from Northeast Second Avenue to I-95 on North Fifth and Sixth streets.

The project would also add missing pedestrian ramps to adjacent sidewalks and upgrade all pedestrian crossings and signage to “high emphasis” for greater visibility.

Miami-Dade commissioners were to decide Wednesday whether to OK an agreement with the city to fund and undertake the project, which would cost $2,064,661.

Miami would contribute $1 million to the project with fees the city has charged electric scooter companies to operate through a pilot program in downtown, Coconut Grove, Brickell, Midtown, Morningside, Edgewater and part of Wynwood.

Miami-Dade would cover the remainder with revenue from road impact fees. Julian Guevara of the county’s Department of Transportation and Public Works (DTPW) would monitor the project.

DTPW plans to test other types of protective barriers in the area. Depending on the results, the county could build similar bicycle, scooter and pedestrian provisions in other urban areas, a memo from Miami-Dade Chief Operations Officer Jimmy Morales said.

The project is in keeping with the county’s Complete Streets and Vision Zero programs, which aim to make streets safer for all users through smart, inclusive engineering and design and to ultimately eliminate all traffic fatalities and severe injuries.

City commissioners argued last July over whether to use the funds set aside for the bike paths to plug budgetary holes they expected due to the pandemic. Joe Carollo and Alex Díaz de la Portilla, who advocated for keeping the $1 million for other city issues, clashed over the issue with Keon Hardemon, Manolo Reyes and Ken Russell, who represents the district from which the electric scooter pilot revenue is drawn.

Mr. Russell noted then that the city’s bicycle master plan was “10 years delinquent.” Over that time, he said, bicycle riders had been injured and died in Miami because they lacked proper accommodations.

But by November, when the Miami City Commission voted on the issue, the city’s budgetary shortfall was estimated to be $2.7 million – about a tenth of what was expected four months before.

City commissioners unanimously approved the program, the construction for which was expected to begin early this year.