Advertisement
The Newspaper for the Future of Miami
Connect with us:
Front Page » Real Estate » Large mixed-use project makes big changes to win OK in Wynwood 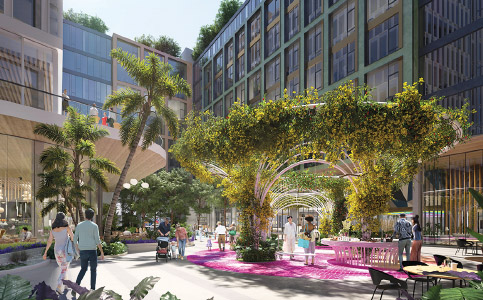 The development team behind one of the largest mixed-use residential and office projects to rise in Wynwood continues to work with the City of Miami Planning Department staff and is confident of final approval.

Owner-developers L&L Holding Co. and Carpe Real Estate Partners are behind The Wynwood Plaza, formerly 29N, which is to rise at 95 NW 29th St.

At its October meeting, the city’s Urban Development Review Board voted to recommend denial of the project to the planning director, citing continued concerns mainly over the massing of the project.

Undaunted by the vote, the development team says it is continuing to work closely with the city staff to address the remaining concerns.

Attorney Steve Wernick, representing the owner-developers, noted that the team already changed the plan to address concerns the board raised in August: worries about the massing along 30th Street and a cross-block passage vehicular access on Northwest 29th Street.

The curb cut for the one-way vehicle entry on 29th Street has been refined with a smaller footprint, said Mr. Wernick.

“We’ve moved some functions into the garage so cars are not queuing in that space,” he said.
The midblock access will be limited to visitor vehicles managed by a valet.
As for the massing on 30th Street, Mr. Wernick said, “We’re working with staff now to introduce an additional element into the façade; it will visually break up the building.”

Designed by architectural firm Gensler, The Wynwood Plaza would bring 12- and 8-story buildings with 509 apartments to the neighborhood, 266,000 square feet of offices, 32,000 square feet of commercial-retail uses, and parking for about 668 vehicles.

“We look forward to continuing our constructive dialogue with the Miami Planning Department and hope to secure final approvals in the near future,” said Adam Metzger, principal and senior vice president of L&L Holding, in an email to Miami Today.

“Since agreeing to acquire the three-acre development site for The Wynwood Plaza just over a year ago, we have been working diligently to produce a design and program that will complement and significantly enhance the dynamic community that surrounds us.

“We greatly appreciate the feedback we have received from a number of important groups, including the Wynwood Design Review Committee, the Wynwood Community Enhancement Association and the city’s Urban Design Review Board.

“The design choices we have made as a result of our conversations have resulted in significant improvements to The Wynwood Plaza’s architecture, pedestrian realm and public outdoor spaces – all of which will benefit residents of the surrounding neighborhood for decades to come,” wrote Mr. Metzger.

He said they remain on target to start initial demolition work early next year.

Mr. Metzger added, “The project is already generating tremendous excitement. We are currently in active discussions for approximately one-third of The Wynwood Plaza’s proposed office space with a number of prospective tenants, which would bring hundreds of new jobs to Miami.”

The project would provide about 25,000 square feet for a ground floor public plaza connected by paseo to the north, south and west.

There would also be about 30,000 square feet of programmable rooftops.

In an Oct. 6 letter to the city, Mr. Wernick pointed out another change to enhance the pedestrian experience.

“The north façade has been modified in multiple ways that elevate and accentuate the paseo entrance. The ceiling height for the 30th Street paseo entrance has been increased from 12 feet to a new 22 feet datum, intentionally creating a more inviting and expansive entry point to the Project from the Wynwood Norte neighborhood into the central plaza and maintaining connectivity through to NW 29th Street.

“The portal width is being maintained at 60 [feet] in width, which is significantly wider than the 10 [feet] minimum dimension required for a cross-block paseo in the NRD-2 and wider than a standard city of Miami right of way, and is pedestrian-only, asserting the importance of the cross-block feature to the Project,” said Mr. Wernick.

“The 30th Street paseo entrance is now adorned with murals on the ceiling and exterior walls above the storefronts to create an immersive art experience … The portal entry is further strengthened by a canopy projection to orient the pedestrian towards the portal and provide additional articulation on the north façade,” he wrote.

The Wynwood Plaza is being described as a modern office tower and a highly-amenitized residential rental building, along with an array of indoor and outdoor dining and retail options.