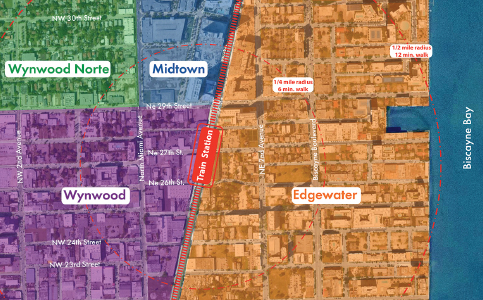 The Wynwood/Edgewater/Midtown station, part of the Northeast corridor of the rapid transit Smart Plan, is still waiting for county transportation officials to pick a specific location and further county commission approval in order to break ground.

“The Miami-Dade County Department of Transportation and Public Works (DTPW) has not yet received approval from the Board of County Commissioners on proposed station locations,” wrote David Jones, department spokesman. “The Department needs to report proposed locations to the Board and receive concurrence or approval.”

In the meantime, the corridor remains in the preliminary stage of design, Albert Garcia, chairman of Wynwood Business Improvement District (BID), a municipal board of the City of Miami representing more than 400 property owners that comprise the 50-city-block arts district, told Miami Today.

Mr. Garcia gave assurances that the private sector is committed to working with the county to help with the cost of building the station to make it easier for all the parties to come together to get a deal done, and he said he was hopeful station construction can start by early 2022.

The Wynwood station is to serve a highly dense population in the county. “All of these different communities are growing and of course the fastest of all of them is Wynwood,” Mr. Garcia said. “Between Wynwood and Edgewater [by] 2025 this is going to be the most densely populated area per square foot in all Miami-Dade County.”

The proposed commuter system would consist of a scheduled service between MiamiCentral Station and Aventura with stops at major employment centers, growing residential areas and in cultural and entertainment areas of the county.

Ali Soule, vice president for Community Relations of Brightline, said in an email to Miami Today that the company remains “committed to working with Miami-Dade Transit on this important initiative that will provide traffic relief and job creation for residents and businesses.”

The corridor tracks that Brightline now uses would also be used by Miami-Dade in partnership with the company to provide rail service in the corridor stations within the county. Once completed, commuters could go from downtown to the Aventura station and then take a Brightline train as far as West Palm Beach.

Mr. Garcia said DTPW and Brightline have been in conversations for over a year negotiating the operations, funds for construction, costs for commuters and maintenance of the station. But until the county and the company reach an agreement, the Wynwood station project cannot move to the process of final designing and construction.

“Until they [the county] enter into the agreement with Brightline, there’s nothing that can be done by the private sector to advance the project,” Mr. Garcia said.

The station could cost $2 million to $5 million, according to Mr. Garcia’s estimates, but he noted that until there is an agreement and Brightline knows the project’s requirements, a specific amount is hard to estimate.

Back in August 2020, the Wynwood BID Board of Directors unanimously resolved to work together with area property owners Bill Ramos and Gary Nader to fund the costs associated with the construction of Phase 1 for a commuter rail platform station in Wynwood, a press note from the organization says.

“We’re really hoping that the county administration, Mayor Cava, and our board of county commissioners work to finalize the deal soon because people are already going back to work and we’re already at pre-pandemic levels as far as traffic, and the number of people that are living and working and moving to Miami-Dade is increasing,” Mr. Garcia said.

“As more people move to Miami,” he continued, “we have to think of solutions to be able to keep up with the economic opportunities that lie ahead.”