Advertisement
The Newspaper for the Future of Miami
Connect with us:
Front Page » Real Estate » Action on vast Wynwood project deferred for changes 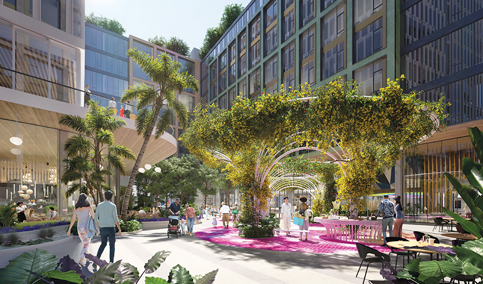 The developer of one of the largest mixed-use residential and office projects to rise in Wynwood has deferred a city review and promises to work with City of Miami staff to help improve the overall project.

The developer aims to tweak the plan based on a series of comments and concerns voiced by members of the city’s Urban Development Review Board (UDRB) at a special meeting Aug. 18.

Owner-developers L&L Holding Co. and Carpe Real Estate Partners recently unveiled the proposal for the dynamic mixed-use development to be called 29N Wynwood, incorporating a modern office tower and a highly-amenitized residential rental building, along with an array of indoor and outdoor dining and retail options.

Designed by architectural firm Gensler, 29N will be one of the largest projects in Miami’s booming Wynwood Arts District.

Members of the UDRB said they were impressed by the overall look of the project, and cheered for its success, but several voiced concerns about the size and massing of a project, which is expected to result in 964,693 square feet of floor space.

“I have an issue with the massiveness,” said Board Chairman Willy Bermello. “It’s huge. It’s huge.”

Board member Ignacio Permuy said, “Not to say it’s a bad project. It is very well designed and thought out.” But he later said changes are needed to help break up the buildings.

“You have to bring some of those elements, in massing not just articulation … bring arch elements onto 30th Street. On a 400-foot-plus continuous building, it should be broken up in the massing,” said Mr. Permuy.

At the suggestion of board members, the owner-developer agreed to rework the project, along with assistance from city staffers, and come back with an improved plan, perhaps in September.

Attorney Steve Wernick, representing the owner-developers, said: “We’d like to voluntarily defer from a vote and bring the project back … We clearly get the message.”

The owner-developers responded to a status request from Miami Today.

“We are committed to working hand-in-hand with the Urban Design Review Board and the local community to create a project that aligns with the goals outlined in the Wynwood Norte Community Vision Plan by bringing ample public outdoor space, a modern office tower and new residential and retail offerings to the neighborhood” said Erik Rutter, of Carpe Real Estate Partners, in an email to Miami Today this week.

Mr. Rutter pointed out that the project has been approved by the Wynwood Design Review Committee and has received support from the Wynwood Community Enhancement Association.

“With the UDRB’s input, we now have a clear path to finalize the design and pedestrian realm of the Project to ensure the project is a catalyst for reinvestment and contributes in a positive way to the evolution of Wynwood,” Mr. Rutter said.

The 2.9-acre property spans two transect zones: Wynwood Neighborhood Revitalization District (NRD-1) T6-8-0 to the south and NRD-2 T5 on the north. The project will have a 12-story building in the NRD-1 area and 8-story in the NRD-2 zone.

The project will embrace the open space by providing about 22,000 square feet for a ground floor public plaza connected by paseo to the north, south and west.

There will also be about 30,000 square feet of programmable rooftops.

Members of the project’s architectural team, Fortis Design + Build, explained details of the overall project at the Wynwood committee’s July 12 meeting, showing renderings of the elaborate and landscaped paseo.

“Almost 25,000 feet of public realm will become a major pedestrian link in that neighborhood,” said one of the developer’s representatives. “For us the public realm captures both spectacle and nature. It’s a place where ecology and art come together. Neighbors and visitors will co-mingle,” he said.

An Aug. 16 letter of support for the project from the Wynwood Community Enhancement Association was read into the record before the UDRB.

“The Project will be an important catalyst for reinvestment and revitalization of the neighborhood, consistent with the 2019 Wynwood Norte Community Vision Plan and one of the first projects submitted under the recently-adopted Wynwood Norte Neighborhood Revitalization District (NRD-2), adopted by the City of Miami in March 2021.

“The Project implements many of the principles and policy objectives from the Wynwood Norte Community Vision Plan, including (I) quality new multifamily residential adding to the mix of housing available in the neighborhood, (II) a grand courtyard emphasizing public open space that is inviting to the surrounding community; (III) an expansive pedestrian paseo providing enhanced connectivity between Wynwood Norte and Wynwood,” reads the letter from Yoni Bornstein, association president.

UDRB members agreed it would be an improvement if the developers’ team redesigned the 30th Street side in a similar fashion to its plans along 29th.

“I agree with Mr. Bermello, this is just too massive for this street,” said board member Robert Behar, referring to 30th Street.

Mr. Behar was also critical of the site plan including a curb cut about mid-block for a one-way lane for vehicle access into the property, limited to visitor vehicles managed by a valet.

Mr. Permuy said, “There are some beautiful things happening in this project … if you address 30th Street in a different way and rethink the vehicle access, this could be one of the top projects in the area.”

The Wynwood Design Review Committee recommended approval with four conditions: engage an art consultant for all art installations; the zoning administrator is to address the setback issue on the Northwest First Avenue side, pertaining to the T6-8-0 requirements on the office building; address or seek clarification on the interpretation or definition of mezzanine as it relates to residential units (whether they are allowed); and improve articulation of the façade at ground level for the pedestrian experience.

In an email to Miami Today, Mr. Wernick said the UDRB asked the development team to incorporate a handful of additional enhancements to be brought back for UDRB’s consideration at the next meeting, particularly to the north façade and refinements to enhance the pedestrian passage entrance on Northwest 30th Street.

“With the UDRB’s guidance at last week’s meeting,” Mr. Wernick wrote, “the applicant will be incorporating final enhancements to the overall project design to maximize pedestrian experience and accessibility to the surrounding community.”