Advertisement
The Newspaper for the Future of Miami
Connect with us:
Front Page » Profile » Raquel Regalado: New commissioner hatching plans for most county issues 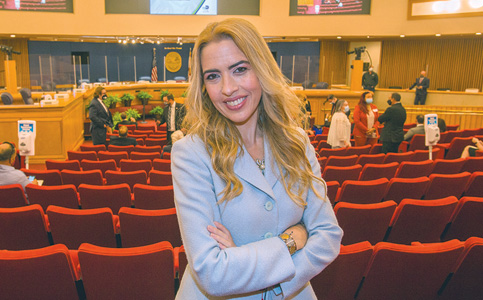 And as one of seven new Miami-Dade commissioners, she is in an optimum position to effectuate her ideas and improve the lives of residents in and outside of her district, which includes part of Miami, Key Biscayne, Coral Gables, Pinecrest and some unincorporated area.

“I’m speaking with mayors and commissioners and attending meetings where I’ll report on what we’re doing in the county,” she said. “In unincorporated, we’re taking a back-to-basics approach. We created a complaint form, have lists and are calling folks. We’re their only representation.”

And as she’s done in past roles – from working as an attorney, serving on the boards of Chapman Partnership and the Arsht Center, among others, and running a campaign for the county mayoralty that took Carlos Giménez to a runoff – she’s wasted little time.

“The day after [I won my commission seat], I was calling the director of waste management and dealing with a bulky trash pickup issue in unincorporated,” she said. “My election wasn’t yet certified, and I was like, ‘Hey, I have a problem.’”

This year marked a decade since she first won public office. In late 2010 – two years after her mother passed away and a year after her father was elected Miami mayor – she ran and won a seat on the county school board.

She’d searched unsuccessfully to find a proper school for her daughter, who’d been diagnosed with autism. Her response: Be the change you want to see. She served on the board for six years before running for mayor.

“I became an advocate for adults and children with disabilities,” she said. “I came at a difficult time, and my knowledge of the state and how it worked became very useful. Rick Scott was governor. He cut education by $1 billion. We had to figure that out.”

With another great economic threat looming today and the deadline to spend Cares Act funds fast approaching, much must be done, and quickly, to ensure Miami-Dade’s future vitality.

The county must prepare to answer that call, she said.

“When the session starts in Tallahassee, they’ll deal with pandemic recovery and figuring out what programs work and don’t work and which we should and shouldn’t fund,” she said. “We need to get ready to present to the state. The clock is ticking.”

One Response to Raquel Regalado: New commissioner hatching plans for most county issues