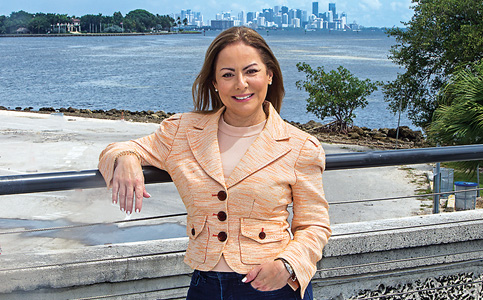 “It can be done.” That is the personal philosophy of the first Chief Bay Officer of Miami-Dade County, Irela Bague. “If you walk into my office, it’s on my wall,” she said. As the advisor to the mayor and the Board of County Commissioners, and liaison between the county and external stakeholders at local, state and federal levels working for the health and recovery of Biscayne Bay, Ms. Bague has many responsibilities on her desk but is also excited about the challenges ahead.

Her involvement in the county dates back to 1993 when she was a legislative aide for District 11 of the county commission, an experience she describes as a “very good crash course” on how government works at the county level. “I worked in a district of the unincorporated area of Miami-Dade County so we really had to work with every department because we didn’t have city services, so you name it, I worked with that department,” she said.

After five years working for the county, she was recruited by the South Florida Water Management District, where she had her first encounter with water policy and Biscayne Bay restoration. “My job was to basically help them promote what later became Everglades restoration in Miami-Dade County, and I also dealt with cities in all things related to flood protection, so that also gave me a big perspective on the environmental issues related to water resources,” Ms. Bague said.

A new professional chapter began when she later worked at the National Audubon Society, started her consulting career, and later was appointed by former Gov. Jeb Bush to the South Florida Water Management District Governing Board. “That was one of the best experiences of my public service career. I learned everything I’ve ever wanted to know about water, Everglades restoration, about how vulnerable and delicate is the South Florida ecosystem, and that’s how I really became a true Biscayne Bay advocate and I’ve never looked back,” Ms. Bague said.

She then rejoined the county government and chaired Miami-Dade County’s 2019 Biscayne Bay Task Force, leading the development of a final report with a series of recommendations to improve the health of the bay that sets a path forward for long-term recovery and restoration.

Among those recommendations, was the creation of a chief bay officer position in the Office of the Mayor. “It was never my intention to consider taking this position, but we just felt that the bay really needed someone to coordinate all the jurisdictions and entities and someone that could bring everyone together,” she said.

Ms. Bague was appointed for the position by Mayor Daniella Levine Cava in January. “She made Biscayne Bay a huge priority, and I had all these relationships, so the opportunity just felt right for me to say yes,” Ms. Bague said.

As chief bay officer, Ms. Bague has at least 60 recommendations from the report that include improvements for water quality, governance, infrastructure, watershed habitat restoration and natural infrastructure, marine debris, education and outreach, and funding.

Ms. Bague also serves as chair of the Resilience Committee of the Greater Miami Chamber of Commerce and is on the board of directors for the Resilient Utility Coalition.

She was interviewed by Miami Today reporter Gabriela Henriquez Stoikow.