Advertisement
The Newspaper for the Future of Miami
Connect with us:
Front Page » Top Stories » Moishe Mana plans 11-building tech center along Flagler 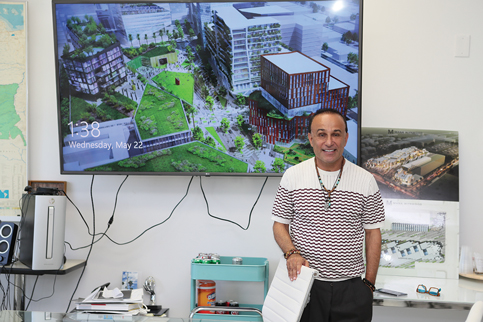 Mana Tech, said Paul Lambert, managing principal of Lambert Advisory, will bring tech and venture capital companies into the city’s core “very much at the direction of Moishe Mana. Flagler Street will be the center, and he plans to re-do the entire block.”

The area, bounded on the east and west by Southeast First and Southwest First avenues and on the north and south by Northwest Second and Southwest Second streets, will contain 11 buildings, most of which already exist and will be renovated. A pocket park will be adjacent to one building, he said.

The Mana Group, already a presence in Wynwood, began acquiring downtown buildings in 2014; it has been reported that Moishe Mana owns about 45 buildings near Flagler Street now. Permits will be pulled shortly to begin renovations, with the earliest of the buildings to be ready in the first quarter of 2021, Mr. Lambert said.

“There is tech in Miami, but it is isolated, and it’s not working as one,” said Uri Adoni, Mana Tech managing director. “We want this whole area to be about tech, and not just local tech. We want to import start-ups, possibly from South America. Start-ups need services, and that’s what we will supply. Usually, these companies would be based in New York City, but Miami can be a target.”

“This really has the power to be transformative, based on the sheer assets and resources you’re deploying,” said authority board member Philippe Houdard, founding principal of Pipeline Workspaces and Skybank Financial. He asked whether the group has any firm commitments from potential tenants.

“We want a mix of tenants; it can be relatively young start-ups with 50 to 100 employees,” Mr. Adoni said. “We’ve also had initial talks with large corporate tenants, but I can’t say it’s mature yet. Give us any leads you have and we’ll filter them.”

“Flagler is the spine and nervous system of downtown,” said Ken Russell, authority chair and Miami commissioner. “We’re setting the table” with the renovation of Flagler Street itself, which is to resume after the February Super Bowl. That project has been driven by the authority and is being funded by the city, the county, the authority and property owners.

“We want to help you recruit,” he told Mr. Adoni. “And we have a bank account that’s meant to do just that.”