Advertisement
The Newspaper for the Future of Miami
Connect with us:
Front Page » Top Stories » Influencers leading the charge in Miami’s tech boom 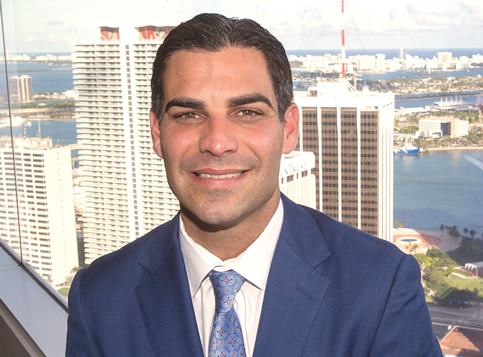 Miami’s tech boom is real, and as cutting-edge companies flee Silicon Valley, New York and other areas to join start-ups and investors here that are turning the “Magic City” into a prime innovation hub, some local influencers are leading the charge.

And it’s likely none comes to mind sooner in that regard than Mayor Francis Suarez, who has courted numerous tech and finance firms like Boston Private Wealth & Trust, Goldman Sachs, Reef and Spotify, among others, to move here.

David Martin, CEO of real estate firm Terra, nominated Mr. Suarez for the category “Bringing Tech to Miami: Those who are leaders in new tech areas in the community,” as did several others.

Not long after FTX Crypto Derivatives Exchange paid $135 million for the naming rights to the Miami Heat’s arena, the company’s CEO, Sam Bankman-Fried, pointed to Mr. Suarez’s efforts and interest in cryptocurrency as a contributing factor in the deal.

More companies are coming. To handle the influx of interest spurred by a flurry of activity from his office (and Twitter account) and friendships with high-profile industry leaders like Elon Musk, Jack Dorsey and Peter Theil, the mayor hired Miami’s first chief technology.

“Every bank, investor and institution is talking about our mayor and his messaging,” Mr. Martin said. “Francis has provided great leadership and has performed a visionary role in how Miami can position itself in this reimagined economy post-pandemic.”

Mr. Suarez said he was honored to be recognized for his efforts but that he could not have accomplished nearly as much on his own.

“I have an entire team – an entire city – behind me that have worked tirelessly over the last decade to turn this moment into a movement,” he said. “It feels like we finally have all the right pieces in place to cement Miami as one of the premier cities of the century, and it’s a true privilege to see my vision for the city I was born and raised in come to fruition.”

Animo Ventures, which has footprints in Miami, New York and San Francisco but also operates elsewhere, takes a boutique approach to investing in small tech and non-tech businesses that are just starting out.

The firm has an “originals only” rule for the companies in which it invests between $500,000 and $2 million, and the 20 start-ups it lists on its website as being either seeded or pre-seeded are all different.

One such company, Finalis, is described as “the world’s first virtual investment banker.” Another is Tinymile, “a robotics company building ultra-light robots that move at pedestrian speed on sidewalks to revolutionize first and last-mile delivery services.” There’s Yay Lunch, a ready-to-eat lunch-delivery service for children that partners with schools and local, organic food entrepreneurs. And then there’s Mathison, which uses artificial intelligence to help employers diversify their workforce.

Mr. Berardi, born in Argentina and now living in here, relaunched Miami-based angel investment group Accelerated Growth Partners in 2014. He was 25. He described Miami’s entrepreneur environment around that time as “an up-and-coming ecosystem” in need of guidance.

Before that, he ran the nonprofit Techo, which serves as something of a Habitat for Humanities across Latin America. That role brought him to the United States to fundraise for the organization.

“He did that wonderfully successfully for three years. Then his entrepreneurial bent got the better of him,” Mr. Ibargüen said. “He ended up going to Harvard Business School and now funds tech entrepreneurship throughout the hemisphere and in the United States. It’ll be impossible not to hear about the guy in the coming decades as a key leader.”

Mr. Houdard is also the co-founder of tech-driven financial transaction company Skybank and serves on the board of the Miami Downtown Development Authority.

“He’s a fabulous guy – young, eloquent and terrific,” Ms. Cervera Lamadrid said. “He’s done a great job of presenting our city and the opportunities it has to offer a lot of the tech companies that are coming, and he’s also helping to get funding for start-ups and incubators.”

Pipeline, self-described as “a high-design shared office space fostering a community of entrepreneurs, start-ups, independent professionals and small business teams,” has Miami-Dade locations in Brickell, Doral and Coral Gables, as well as spots outside the county in Fort Lauderdale, Orlando, Tampa and Philadelphia.

Pipeline’s membership includes a who’s who of tech giants – Google, IBM, Microsoft, Kayak, Uber and Postmates among them – and, naturally, its flex office space model, which encourages collaboration among tenants, has attracted smaller, burgeoning companies that could be the next big thing.

“Miami has surprised many people by emerging as one of the world’s newest and most dynamic tech hubs. But Miami is still young and always creating surprises, always reinventing itself, often as a result of new ideas and attitudes from all over the world converging here,” Mr. Houdard said. “Now the city is attracting, keeping and developing some of our generation’s most imaginative tech entrepreneurs, and through our work at the Miami Downtown Development Authority and Pipeline Workspaces, I’m just glad to be part of the effort to make it a city where bright minds can flourish.”