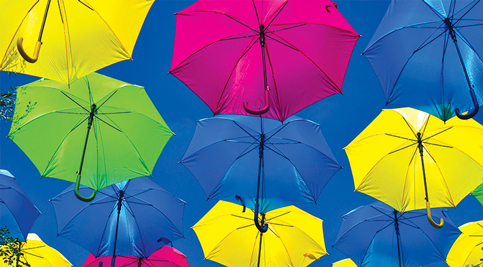 With the economy reopening and talks starting about a pedestrian promenade connecting Ocean Drive, Lincoln Road and Española Way, Miami Beach officials are looking at installing more temporary public art in the city in the next few months as a way to encourage the economic rebound.

Past temporary art installations like Coral Gables’ “Umbrella Sky” project on Giralda Avenue drew great community interest and stirred up business for nearby institutions, and Miami Beach could do something similar in the wake of covid, said Commissioner Ricky Arriola at a May 21 Finance and Economic Resiliency Committee meeting.

Lissette García Arrogante, the city’s director of tourism and culture, said staff research has shown that two separate temporary art installations could be commissioned for around $300,000. In conjunction with the transportation department, she said, staff members are also applying for Bloomberg Philanthropies’ “Ashphalt Art” grants, which help cities create “visual interventions” on the pavement of streets and sidewalks. If received, she said, a grant would probably go toward a street art installation in the roadway between Ocean Drive and Española Way.

This idea, Commissioner Mark Samuelian said, dovetails nicely with the proposal for a South Beach Promenade that would connect Española Way, Lincoln Road and Ocean Drive, and the committee asked that the items be brought back together. Of two possible installations, Mr. Arriola said, this idea should receive priority.

The committee expressed a desire to move quickly with the hope of receiving funding in the coming budget cycle and getting something moving within the next few months while the economy is still recovering from covid.

The committee plans to ask the city’s Cultural Arts Council to work on the project, but the commission must approve any decisions before action is taken.