Advertisement
The Newspaper for the Future of Miami
Connect with us:
Front Page » Government » Miami Beach sees pedestrian future for Ocean Drive 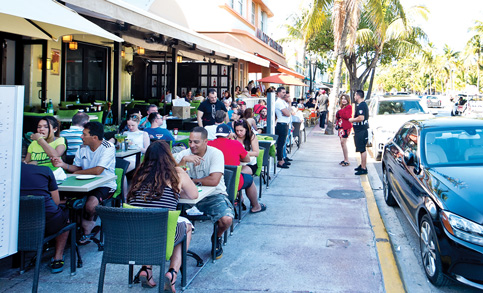 Miami Beach has applied for a county permit to keep Ocean Drive pedestrianized, but the short-term future of the iconic road is still up for debate.

In May 2020 the county approved temporary closure of Ocean Drive to vehicular traffic, Miami Today reported, and a final configuration will be explored as part of the Art Deco Cultural District preliminary concept plan by Zyscovich Architects that is to be complete by December.

The big question officials face now is how the road will look in the meantime.

Staff put together five possible scenarios based on a pedestrian-first philosophy, City Manager Alina Hudak told commissioners last month; none of the options included a return to two-way travel lanes for cars.

The Freebee service, Ms. Hudak said, would be at the expense of businesses on the road and allow visitors to be dropped off at restaurants and hotels without having to open the road to private vehicles.

Commissioners and members of the public had much to say about the plan, with no action being taken at the last meeting and staff instructed to keep working.

Business owners on Ocean Drive commented on possible pitfalls of the plan, noting that Freebees in particular would require parking somewhere, take long periods to charge and could be inaccessible for some disable guests. While one goal of the plan is to break up spaces where congregation and bad behavior occurs, noted Jonathan Plutzik, owner of the Betsy Hotel, sandwiching a 14-foot pedestrian space between buildings and sidewalk cafes may simply bring the party closer to businesses.

Multiple commissioners questioned separating the sidewalk cafés from their restaurants via this sidewalk, which waitstaff will have to cross with food and drinks in hand.

The 20-foot shared space for bikes, pedestrians and Freebees was another sticking point for commissioners including Micky Steinberg, who pointed out that collisions or near-collisions between bicyclists and pedestrians on the nearby Beachwalk were already common. According to Mr. Gonzalez, 20 feet of clear space are needed to maintain emergency vehicle access, but non-barrier options for splitting up the space could be considered.

Whether the road should remain pedestrianized at all was another discussion, with Commissioner Steven Meiner asking whether the road could keep some version of the proposed configuration during the day and be opened to vehicles at night to break up the party atmosphere on the street. This option, Mr. Gonzalez said, would require easily movable barriers on the streets abutting Ocean Drive.

Anything is possible with enough funding, Ms. Hudak said, but the project will only be temporary. Multiple commissioners and members of the public mentioned that, if materials such as planters are bought, they should be high enough quality that the city can reuse them later for other purposes.

Following discussion, staffers were asked to consider the feedback and keep working on options, which can now include the possibility of bringing traffic back to the street. Mayor Dan Gelber also suggested a special meeting dedicated to the issue, though this has yet to be scheduled.