Advertisement
The Newspaper for the Future of Miami
Connect with us:
Front Page » Communities » Miami Beach drives to be more bicycle friendly 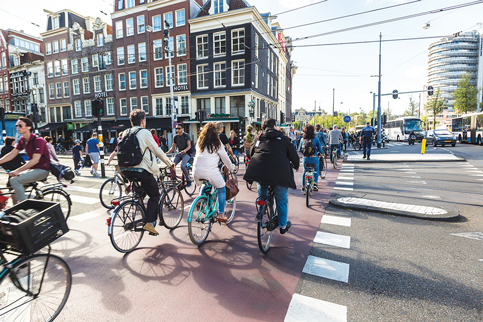 Miami Beach officials are looking to continue progress toward becoming a more bicycle- and pedestrian-friendly city by closing gaps in their riding networks and looking at future pilot and legislative opportunities.

At a special workshop late last month, Beach officials and consultants discussed progress on the city’s Bicycle and Pedestrian Master Plan as well as next steps.

The City’s Bicycle and Pedestrian Master Plan, implemented in 2016, outlines three tiers of projects. The first, which was intended to take five years, includes closing existing gaps in the city’s bike and pedestrian networks. The second, intended to take 10 years, would include projects that can retrofit current streets to include bike and pedestrian facilities without altering curbs, gutters or road dimensions. The third and final phase includes long-term, aspirational projects that will include major investments like raising streets and widening sidewalks.

Josiel Ferrer-Diaz, assistant transportation director, told commissioners that 89% of tier one projects are either complete or in development, yet 48% of tier one projects, he said, are either not funded or partially funded. A number of partially-funded projects, he said, are in this state because they are intended to be completed as part of greater neighborhood improvement projects and cannot be done as standalone efforts.

One way to address this issue that administrators are working on fleshing out, he said, is inspired by a similar ordinance implemented in Cambridge, MA, which gives more teeth to bicycle timelines. The original ordinance, he said, sets timelines for improvement projects to be completed and mandates temporary projects be installed when permanent ones will be built far in the future.

There is a possibility, said Transportation Director Jose Gonzalez, that staff could look at the timeline of city projects and consider implementing short-term solutions to fit the need that will be filled by those projects that will not be built until years down the line. However, City Manager Alina Hudak said, this effort is still in its very early stages.

Pilot projects, he continued, could provide an idea of what it looks like to fill these holes. One unfunded idea, he said, is to create protected bike lanes on Pine Tree Drive and LaGorce Drive. The project, he said, would cost around $100,000 and close a critical gap. However, he said, one challenge is that the road is under county jurisdiction.

The city, Mayor Dan Gelber said, must consider the consequences of expanding the bike network, including the effects these efforts would have on the area’s already-infamous auto traffic.

In preparation for the workshop, Mr. Ferrer-Diaz said staff studied the efforts of other bike- and pedestrian-friendly cities like Santa Monica, Amsterdam, Copenhagen and Stockholm. The takeaway, he said, is that these cities didn’t start as “bike cities” – they became so through political will, innovation and, especially, education starting at a relatively young age.