Advertisement
The Newspaper for the Future of Miami
Connect with us:
Front Page » Top Stories » Miami Beach may sell six city properties

Written by Kylea Henseler on May 11, 2021
Advertisement 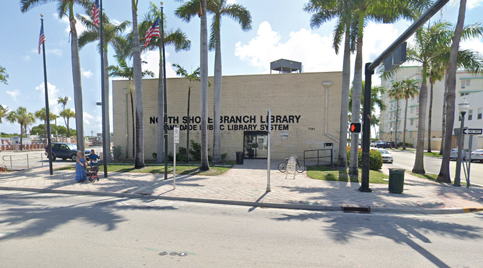 Miami Beach staff have targeted six city properties that could sell for a total of over $70 million that could then fund capital improvements.

The big-ticket sale in the group would be the land that currently houses the soon-to-be-moved North Shore Branch Library at 7505 Collins Ave., which is estimated to be worth $58 million to $65 million, according to a presentation from the city’s Property Management Department.

Commissioners and administrators held preliminary discussions about the properties at the most recent Finance and Economic Resiliency Committee meeting, where Director of Property Management Adrian Morales explained that the six properties were narrowed down from a total of 136 assets that officials and consultants CBRE identified as showing “potential for disposition.”

The money from selling any of these properties, Commissioner David Richardson said, could fund other city projects but should not be used to fill gaps in city operations.

Some of the properties, said Commissioner Mark Samuelian, could potentially be leveraged into public-private partnerships, while others could be sold outright. The committee tasked staff with looking further into the proposed properties, in particular the library, and returning with recommendations.

However, Mr. Richardson noted that he had previously believed that the Sunset Drive site was a public park, and that many members of the community might see it as public green space as well.

The department identified two more properties that don’t yet have price estimates; a 2,757-square-foot vacant lot on Commerce Street and a 15,313-square-foot lot on 87th Terrace.

Residential lots, Mr. Samuelian said, may be “low-hanging fruit” for a sale, though he said how the funds should be used is a separate discussion.

Selling the parcel that currently holds the library, which will eventually be moved into a new complex on 72nd Street as part of a General Obligation Bond project, could be a good way to make up the existing $40 million funding gap for that project, Mr. Richardson said. Mr. Arriola said he wondered if the $40 million gap was actually accurate or if it could be lower, and Mr. Samuelian said that $40 million would be a lot to spend on one project and that there would need to be further discussions.