Advertisement
The Newspaper for the Future of Miami
Connect with us:
Front Page » Arts & Culture » Coral Gables sounds out merchants on adding street music 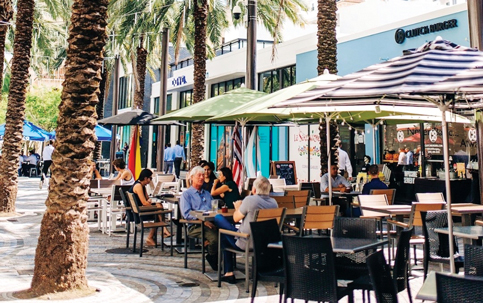 During their March 9 commission meeting, Commissioner Michael Mena brought up a discussion on whether restaurants or venues residing at the Central Business District should have lighter restrictions to play live music.

Mr. Mena said he has been contacted by business owners like Bay 13 Brewery at 65 Alhambra Plaza inquiring if there is another way to play outdoor music without having to get a special event permit every time, which comes with fees.

“For a restaurant or brewery to have to do that, if they just want to have some live music on Fridays for a happy hour seems to be a little bit of overkill,” he said.

The city attorney’s office was asked by Mr. Mena to look into other municipalities and see if some similar permits or exemptions allow restaurants to play outdoor music without going through a special event permit process.

Several cities were looked at and most had a general prohibition similar to Coral Gables, said Cristina M. Suárez, deputy city attorney.

“One city we saw had an entertainment district where [merchants] can apply for a permit,” she said. “We did see in one city that kind of exempts from the special events process what they call minor outdoor activity that’s limited in accordance with the number of persons attending [and] that it won’t have any impact on traffic, including surrounding neighborhoods.”

Perhaps one option is to create an exemption in the code for outdoor music on private property for small events, she added.

There should be time limits and there should be decibel limits, Mayor Raul J. Valdes-Fauli responded to Mr. Mena. “But we have to be reasonable. I would suggest that you chair a committee or a group to listen to merchants who wish to have music and see what they say.”

Currently, through a special event permit, live amplified music can go as high as 85 decibels in Miracle Mile and 75 decibels in Giralda Plaza.

“I’m willing to be more flexible at the decibel level per se as long as there are strict hours of operations and limit it to Central Business District,” Mr. Mena said. “Long story short, I wanted to get you guys’ [city commissioners’] general perspective just to see if there’s an appetite for it.”