Advertisement
The Newspaper for the Future of Miami
Connect with us:
Front Page » Top Stories » Illuminate Coral Gables plans even bigger spotlight 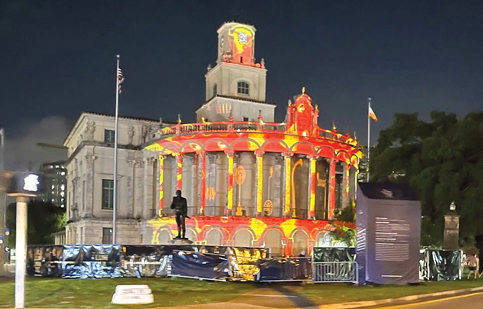 After the success of Illuminate Coral Gables 2021, the public art initiative is planning to come even bigger for 2022.

Illuminate Coral Gables 2022 will make its grand return on Jan. 14 and run for six weeks compared to this year’s four-week initial launch back in February.

“The project we did last year, for the record, had eight exhibitions. We’re proposing to do 18 for next year’s budget,” said Venny Torre, Illuminate Coral Gables’ founder, during Tuesday’s Coral Gables City Commission meeting. “What we’re doing here is that we’re putting this event on the international map.”

With a very diverse group of artists from all ends of the world, Illuminate Coral Gables is planning new programming, which includes an art workshop to reach about 330,000 children within all nine city districts. The children will learn in person and through workshops about identity, self-portraiture and formal art-making, said Lance Fung, Illuminate Coral Gables’ chief curator, during the meeting.

One of the signature events for Illuminate 2022 will be a new illuminated textile piece that would be suspended in the colonnade of palm trees down Alhambra Plaza where people will have photo opportunities, play, and a sense of discovery, Mr. Fung explained.

The idea has always been to create something unique, very special. The idea is to bring it to a very high level always leading with culture, Mr. Torre added.

“This is supposed to be something that is from a very high level, we’re not doing a festival or anything of the sort,” he said. “This is meant to be taken seriously by very important artists.”

The art initiative and programming has been a big economic driver and critical to turn the page with covid, Mayor Vince Lago said.

“This is a big deal for the city of Coral Gables to be chosen as a real cultural arts destination,” he said, “and that we are here to support the business community and really provide something that is going to produce value.”

One Response to Illuminate Coral Gables plans even bigger spotlight