Advertisement
The Newspaper for the Future of Miami
Connect with us:
Front Page » Profile » Keon Hardemon: New Miami-Dade commissioner heads League of Cities 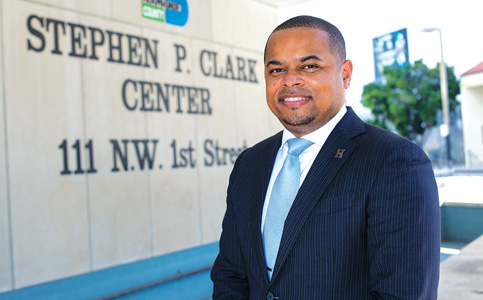 Miami-Dade Commissioner Keon Hardemon has made his community his career.

Born and raised in Miami, the former assistant county public defender was first elected to public office in 2013, when he won one of five seats on the Miami City Commission.

From there, his ascent was steady. By the time he vacated his city commission seat last year to run for county office, he was serving as the commission chairman and as president of the Miami-Dade League of Cities, a role he still holds.

Add to that his private law practice and it is no mystery why he believes he’s always on the clock, one way or another.

“I realized when I became a professional that I’m never off, never have downtime, especially as an elected official. I am always Keon Hardemon the attorney and commissioner, and people approach me as such,” he said. “At all times, I’m thinking about cases and how I can confer people’s defense. At all times, I’m thinking about Miami-Dade residents and how I can serve them.”

His constituents are many. Miami-Dade’s third district contains the Miami neighborhoods of Little Haiti, Overtown, the Upper East Side, Edgewater, Buena Vista, Allapattah, Wynwood, Venetian Causeway, Watson Island and Liberty City, where he grew up.

The district also contains the villages of El Portal and Miami Shores, as well as the Brownsville, Military Trail Park, Biscayne Shores and Gardens Park areas.

The needs of his district, he said, are the same as the county’s at large: better transportation, affordable housing, environmental resiliency, curbing crime and economic development.

“The county has organizations focused on job creation. When you have an area that lacks jobs, like parts of my district, it affects the county economy,” he said. “When I focus on issues that need triage in my district, it has tremendous effects on how Miami-Dade is viewed.”

That one change, he said, has helped shift public perception of an area people long avoided.

“We changed that narrative,” he said. “Now you have a reason to visit a restaurant where your average ticket per person could easily be $75. It’s a huge economic engine for that community, will cause the development of more restaurants, safer spaces, more housing, an increase in job numbers, a pride in the place of the people in that area. It will make Miami-Dade safer and improves the quality of life for everyone who lives in the county, not just the district.”