Advertisement
The Newspaper for the Future of Miami
Connect with us:
Front Page » Government » Jackson Health to build emergency medical hub in Coral Gables 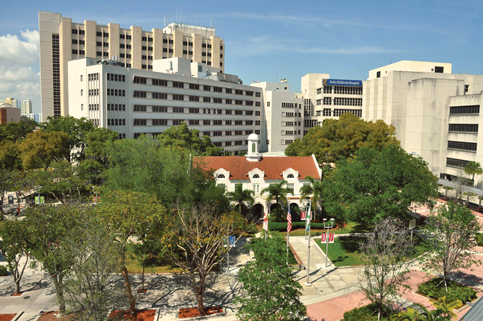 Work will begin in six months on a new emergency medical facility in Coral Gables that will serve Jackson Health System patients inside the city and within five miles of it.

Miami-Dade commissioners voted unanimously for the project at their final full meeting of 2020, advancing the latest expansion for the nonprofit public healthcare system that since 1918 has grown from community hospital with 13 beds to a network of thousands.

The single-story building, referred to in Miami-Dade documents as the Jackson Health Emergency Department at Galiano, will be built on two county-owned parcels on the corner of Oviedo Avenue and Southwest Eighth Street, also known as Galiano Street.

The larger emergency department will have eight exam rooms and support space, two resuscitation rooms and computerized tomography and radiology equipment. The building will also serve as a primary care space for with six exam rooms.

There will be 36 parking spaces outside, including two that are compliant with Americans With Disabilities Act requirements. Some spaces will be convertible for electric vehicle charging in the future.

Materials attached to a prior memo by former county mayor Carlos Giménez shows architectural and design firm Gresham Smith and engineering design firm Kimley-Horn as having worked on the project.

The project is now in the design and development phase, but Jackson has already approved the schematic design and layout of the facility. Miami-Dade expects construction documents to be final soon, with construction to begin in June and end in July 2022.

The roughly one-acre property, which Ms. Levine Cava’s memo said “was gifted” to Jackson by Commissioner Rebeca Sosa, the authorizing item’s sponsor. It is in an area zoned for limited commercial and single-family residential use.

“This…will be a miracle place in an area that we don’t have anything,” Ms. Sosa said.

Most of the project’s funding will come from the Jackson Miracle Bond program, “which includes work at all existing Jackson campuses and the creation of new facilities across Miami-Dade,” the memo said.

An additional $1 million will come from the county’s Building Better Communities general obligation bond program. Commissioners in October OK’d allocating to the project funds from the more than 16-year-old program, which includes an entry for “primary health care facilities” development.

A map depicting the five-mile radius of the property shows that the facility will serve communities in Coral Gables, Miami, Westchester, West Miami, Virginia Gardens, Miami Springs and Medley.

In the next five years, the population of those areas is expected to grow by 45,000 people, a 7.3% increase. The fastest-growing segment, the memo said, will be residents aged 65 and older who will “demand increased medical services,” and “the majority of patients treated [at and released from an emergency medical facility] originate from ZIP Codes within a five-mile radius.”

The memo said, “Depending on the size of the ZIP Codes and the population density, a two- to five-mile area can represent between 50% and 70% of the [patients] treated.”