Advertisement
The Newspaper for the Future of Miami
Connect with us:
Front Page » Healthcare » Opening of Jackson West in Doral finally firm 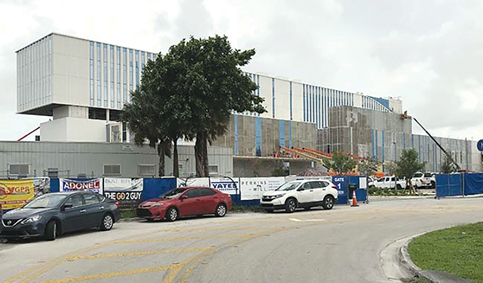 Jackson West Medical Center will open its doors to patients Aug. 2, while staff will be in the building starting July 12 according to CEO Eddie Borrego.

The opening of the facility, which Mr. Borrego said will be the first acute-care hospital in Doral, has been delayed several times.

In 2019, Miami Today reported, Jackson Health System announced its plan to open the hospital with a target date of October 2020. Yet last October, due to issues surrounding bad weather and the rise of the pandemic, that date was postponed to spring and, eventually, summer 2021.

Now, Mr. Borrego said, construction is complete with the exception of “punch-list items” like painting and minor aesthetic details.

The building, he said, was carefully designed with patients and families in mind down to carefully curated, comforting smells and paint colors and lobby furniture equipped with charging outlets. Even food, he said, will be provided through a partnership with Miami Dade College’s culinary programs to ensure patients don’t feel like they’re eating “hospital food.”

The hospital, he said, aims to take care of the patient, not just their diagnosis, and will make patients the “captain of their own care.” Each room, he said, is equipped with smart technology that will allow patients to stream movies as well as view information about their diagnosis, treatment options and caregivers.

Families, he said, will be able to stay updated on the progress of procedures like surgeries through a text-messaging system, and all machines will be state-of-the-art.

Around 450 staff have already been hired to join the “care team” at the hospital and on-campus medical office building, Mr. Borrego said, and in July they will begin practicing “day-in-the-life” scenarios in the new facilities and getting acquainted with the buildings. Hiring, he said, will continue to be a rolling process.

Jackson West’s Chief Medical Officer, Mr. Borrego said, is Dr. Hannah Thompson, a trained anesthesiologist who graduated from University of Miami’s Miller School of Medicine. An effort was made to hiore locally, Mr. Borrego noted, including from the Doral community.

The Doral hospital, Miami Today reported, will officially be named the Jose Milton Memorial Hospital at the Jackson West Medical Center campus. The address is 7800 NW 29th St. Although located in Doral, it will also serve surrounding areas west of Florida 826 that have long been part of a healthcare desert.

The hospital and on-campus office facility will feature an emergency room, surgical center and a state-of-the-art inpatient and outpatient diagnostic facility. Through a partnership with the University of Miami, other practices will be offered as well including obstetrics, orthopedic surgery, bariatric surgery and pediatric specialty.

When the facility opens Aug. 2, Mr. Borrego said, the emergency room will be ready to handle “whatever comes through the door.” Surgical procedures, he said, are already being scheduled. “We will be fully ready to go.”