Written by Kylea Henseler on May 26, 2020
Advertisement 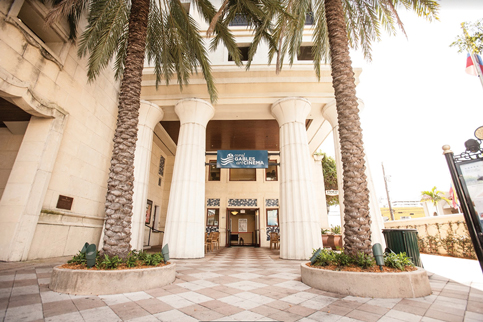 Movie theaters might not be physically open in Miami-Dade yet, but that hasn’t stopped 10-year-old Coral Gables Art Cinema from providing a plethora of virtual programming for patrons and eying an ambitious city-backed expansion that is to include adding a second auditorium. An update and discussion of the project was planned for the May 26 Coral Gables City Commission meeting but was deferred.

Last May the city committed $350,000 to help the cinema, currently at 260 Aragon Ave., expand into an adjacent property at 240 Aragon Ave. While the city is currently leasing that property to Patio and Things, the cinema hopes to begin expansion soon after this tenant leaves Sept. 1.

Vice Mayor Vincente Lago, a patron of the cinema himself, said prior to Tuesday’s commission meeting that he was excited about the expansion plan as it brings cultural value to the community and drives traffic to local businesses.

“Well over 39% of (Coral Gables’) tax base is attributed to the vibrancy of our downtown,” he said. Destinations such as the cinema, he continued, are important because they not only provide a positive experience to patrons but create a spillover effect that helps other businesses.

“When (people) enjoy the cinema,” he said, “they always end up having a drink or dinner or enjoying Books & Books, which is an important cross-pollination that draws people to our downtown.”

In fact, Brenda Moe, the cinema’s co-executive director, told Miami Today that the cinema’s estimated economic impact is over $2 million annually. When expansion is complete, she said, that impact will increase to around $3.3 million.

According to Ms. Moe, the expansion will include a lobby, cafe area, three offices, a janitor’s closet and an auditorium with roughly 92 seats. The final project, including three months of operating expenses, will cost $850,00 to $1 million, she said.

Of this sum, Ms. Moe says $525,000 has already been committed between funds the city granted and those the cinema raised. In addition, she said, industry-leading companies such as Magna-Tech Electronic Co. will donate roughly $400,000 worth of equipment in kind to finish the project.

Ms. Moe told Miami Today that the current funds were enough to begin the expansion this fall, and it could be complete as soon as next spring. However, she said an exact timeline will be determined once the cinema has a better idea of when it will be able to reopen.

In the meantime, Ms. Moe said the cinema has found ways to engage the community during the coronavirus shutdown that forced the cinema to close its doors March 18.

“By March 20,” she said, “we had launched what we were calling the Gables Cinema Drive In.” This initiative, which has been featured in “The Hollywood Reporter” and “BoxOffice Pro,” can be found on the cinema’s website and features a collection of films in the public domain curated by associate director Javier Chavez and made available for free streaming.

So far, over 7,000 people have visited the virtual drive-in, and another 4,000 have visited the cinema’s virtual screening room – a new feature that allows users to rent and screen more current films directly from distributors. According to Ms. Moe, the cinema receives 50% of profits generated by these screenings.

In total the cinema has earned about $40,000 in revenue since the shutdown began, in large part due to donations and purchases of gift cards and memberships. At the moment, it’s offering all memberships at a 25% discount. In addition, a current promotion offers a $10 bonus for every $25 loaded onto a gift card.

Despite having to lay off 14 employees when the crisis began, Ms. Moe said the cinema, which is a nonprofit organization, secured a Payback Protection Program (PPP) loan in mid-April and was able to re-hire and provide relief checks to all employees.

For now the cinema will continue to provide virtual content to its patrons, including an online version of its popular “Children and Family” program. According to Ms. Moe, this collaborative effort with the Coral Gables Museum includes nine weeks of family films curated by “Children and Family” program chair Midge Blumberg-Krams paired with themed lesson plans and activities created by the museum’s director of education, Liliam Dominguez.

While it’s unclear when guests will be able to visit the cinema in person, Ms. Moe did share two of her favorite selections from the virtual screening room for fellow movie buffs: “The Woman Who Loves Giraffes” and “Fantastic Fungi,” she said, are two documentaries worth checking out.