Advertisement
The Newspaper for the Future of Miami
Connect with us:
Front Page » Arts & Culture » Coral Gables Art Cinema expanding 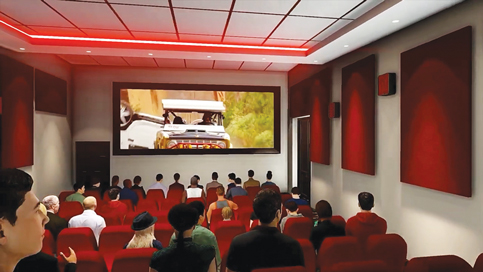 Set to break ground in February 2022, the Coral Gables Art Cinema is expanding its community outreach with a brand new 92-seat state-of-the-art auditorium and screen.

With help from the city, Coral Gables Art Cinema is converting a storefront retail space at 240 Aragon Ave. into a modern film theater with a large lobby, curated café, and administrative offices. A re-envisioned storefront will feature late nineteenth through twentieth-century cinema museum artifacts, which will management says enhance the beautification of the city and cultural arts experience.

In collaboration with Magna-Tech Electronic for the expansion design, Ferguson Glasgow Schuster Soto Inc. on the architectural drawings, and M2E on the mechanical and engineering design, the expansion will make a transformational impact on the downtown corridor of Coral Gables and ensure the continuation of world-class programming, education, and community investment initiatives for future generations, said Brenda Moe, Coral Gables Art Cinema’s executive director.

“The additional space will increase our annual attendance to 80,000 with an expected economic impact of $3 million,” she said.

More sensory-friendly screenings, curated conversations with leading cultural arts and film experts, and programming serving underserved children will be heavily on the agenda for the new auditorium.

“We are almost there in terms of our goal,” Ms. Moe said of the $1.5 million budgeted auditorium. “We have about $350,000 left to raise. Obviously, we would like to go above and beyond that, which would allow us to have some operational reserve that is critical for any organization to have.”

The art cinema has launched the “More Than A Cinema” capital campaign to support the expansion project, which will run through the spring of 2022.

“Our founder Steven Krams had a vision when he partnered with the city in 2006, and everybody who’s involved in this project is just thrilled to see an expansion of his vision,” Ms. Moe added. “We have served this community for more than a decade and we’re just grateful to move forward with this project.”