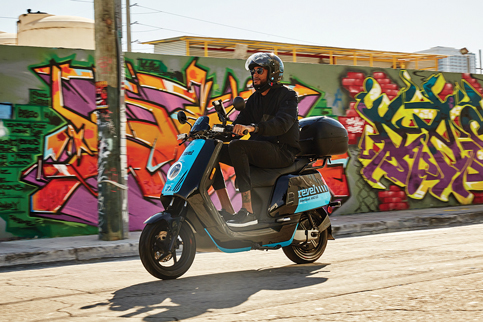 After coming to an agreement with the Miami Parking Authority, an electric moped sharing company has unleashed its fleet to the Miami streets and is slated to bring more than 30 jobs here.

In November, the authority’s board unanimously approved awarding a contract to Revel, after the authority requested proposals. Since then, the company has set up shop in Allapattah.

“The addition of electric mopeds, as a new mode of transportation in Miami, is another quantum leap forward in support of enhanced mobility in our city,” said the authority CEO Art Noriega in a press release. “Once again, the Miami Parking Authority prides itself in leading innovative approaches that enhance mobility and the way our customers move and park in Miami.”

Revel will translate its app to Spanish and Creole, which had been suggested by the authority’s directors. The service area includes Allapattah, Brickell, Coconut Grove, Coral Way, Downtown Miami, Edgewater, Little Haiti, Little Havana, Liberty City, Model City, Overtown and Wynwood. While riders are not bound to the service area, they must begin and end their rides within the service area.

Revel is also offering the Revel Access program, providing a 40% discount to users who qualify for local, state or federally administered assistance programs. Active military and veterans will get a 20% discount.

During the November authority meeting, Paul Suhey, COO and co-founder of Revel, projected Revel’s agreement with the authority could result in $450,000 a year for the authority. The authority stands to earn 5% of the gross revenue.

Jonas Mikolich, general manager for Miami, said Revel had hired more than 30 employees, all of whom would receive benefits. At the time of a phone interview, he said the 750 mopeds were being rolled out throughout the service area.

Mr. Mikolich said that pivotal to the success of the Revel model is that the company wants to be a true partner with the city. He said Revel offers moped lessons and a customer service hotline.

“Revel has been designed to integrate with a city like Miami,” Mr. Mikolich said. “One of the things that makes Miami special is people are already familiar with the moped.”

Revel riders are to park perpendicular to the curb, with the vehicle’s back tire touching the curb. The mopeds can be parked in the authority’s parking spots, including residential permit parking zones, all metered zones, and spaces intended for motorcycles and mopeds. Mr. Mikolich said the mopeds will take advantage of portions of parking spots not typically occupied by cars.

Revel’s electric mopeds go up to 30 miles per hour and all are street legal. Use of a moped comes with two safety-certified helmets.

Revel charges $1 per user to unlock the vehicle and 29 cents per minute to ride. To register, users must be 21 or older and have a driver’s license and a safe driving record. The company charges a $5 application fee.

Revel began its moped sharing in New York City and in addition to Miami has expanded to Washington, DC, and Austin.