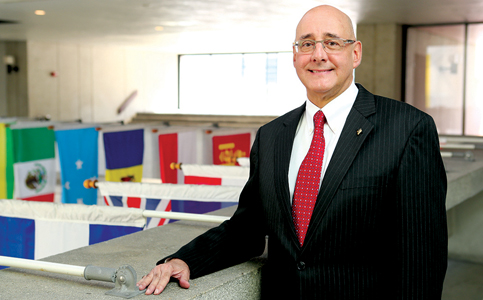 Rolando Montoya was three years retired. The former provost emeritus of Miami Dade College and his wife were traversing the world, from the Galapagos Islands, Spain and Australia to Mexico and the Peruvian Andes. Domestically, they traveled to states they’d never before seen and visited friends and family.

They were happy, and he had no interest in working again.

“I had a very enjoyable retirement,” he said.

But in Miami, the institution to which he’d dedicated three decades of his life was in upheaval over who would replace its longtime president, Eduardo Padrón.

After a long, arduous selection process by the school’s board of trustees went nowhere, the faculty’s union sued to resume order. By then, some staff had reached out to Dr. Montoya for help.

“Lots of employees who know me well were calling me home, expressing incredible levels of anxiety,” he said. “Everybody would imply that I should in some way get involved in the process, maybe advocate with some of the trustees. Some suggested, ‘Why don’t you apply yourself?” I kept saying, ‘No, no, no.’”

The requests didn’t end. He received a call from a board member – “a representative of an important faction,” he said – asking that he reconsider an appointment. He again declined. A few days later, another trustee from another faction called with the same request.

Dr. Montoya was an ideal candidate. He’d begun at Miami Dade College in 1987 as a professor and steadily risen through the ranks to reach the second-highest rung on the administrative ladder.

“I’ve occupied every position you could find,” he said. “I was a professor for 11 years, department chair for three, academic dean for two, president of Wolfson Campus for six years, provost nine, and then Gov. Rick Scott appointed me trustee on the board, from which I kept very connected to the college, too.”

As such, the school’s myriad stakeholders were of seeming uniform opinion on only one thing.

“The community was divided. They mayor was writing. The foundation board wasn’t too happy with the college board. The employees were anxious,” he said. “But the main signal was when people with different opinions coincided on the idea that I could bring tranquility, order and provide a period of transition that would be helpful for everybody. I said, ‘This time, I need to accept.’”

Since doing so, he said, people are talking again. The college, spread across eight campuses in Miami-Dade, is moving forward once more.

“The atmosphere is very cordial and professional,” he said. “We are back in a period of normality at this institution.”

Dr. Montoya sat down with reporter Jesse Scheckner. The interview, recorded by Jahmoukie Dayle, can be viewed below.