Advertisement
The Newspaper for the Future of Miami
Connect with us:
Front Page » Profile » Jerry Plush: Transitions Amerant from a subsidiary to a community bank

Jerry Plush: Transitions Amerant from a subsidiary to a community bank 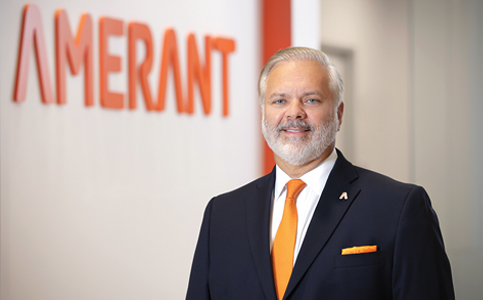 Jerry Plush, a veteran of the finance industry, is leading Amerant Bancorp’s transition from a subsidiary to a community bank as the institution’s newest CEO. Mr. Plush took on the role in February, promptly moving to Coral Gables to prove he was “all in” on the bank’s local focus.

Miami-Dade, he said, is a unique market and community that presents a great deal of opportunities. Amerant, he said, is working hard to cement its place in it and plans to become more involved as the economy continues to rebound post-covid.

Prior to being named CEO of Amerant, Mr. Plush was a member of its board and a partner in Pennsylvania-based private equity firm Patriot Financial Partners L.P. Throughout his career in finance, he held a variety of positions including CEO of Verdigris Holdings, Chief Financial Officer and Chief Administrative Officer of Santander U.S., and President of Webster Bank.

While he moved through roles in finance, Mr. Plush also took on a number of roles in the nonprofit sector including working with Junior Achievement, an organization dedicated to teaching young people entrepreneurship and financial literacy skills.

He served as chairman of Junior Achievement of Southwest New England, and most recently was a member of the board of directors for the group’s Southeastern Pennsylvania chapter. He was also on the board of trustees of the Connecticut Public Broadcasting Network, founder and event chair of the Children’s Charity Invitational, and a member of the Board of Overseers for the WGBH radio station in Boston.

Though he has only been in Miami a few months, Mr. Plush said he is hoping to get more involved in the community and has already become a member of United Way. Professionally, he said Amerant looks to serve by working on digital solutions, helping small businesses and focusing on its role as a community bank.

“We’re excited about our prospects,” he said. “I have every intention for us to be a leading financial institution, headquartered here, that does a lot to give back to the community.”