Advertisement
The Newspaper for the Future of Miami
Connect with us:
Front Page » Profile » Liliam López: President of South Florida Hispanic Chamber of Commerce 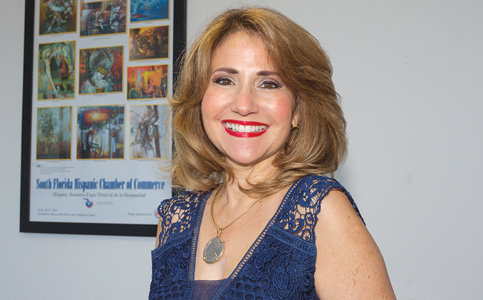 Liliam Lopez’s first inclination after college was to pursue a law degree. After all, she’d already attained certification in paralegal studies. But a friend convinced her to apply for a top role with a Miami nonprofit.

The rest is history.

As an early 20-something, Ms. Lopez became executive director of the Spanish American League Against Discrimination, a nonprofit that since 1974 has fought for equal treatment of Hispanics in housing, employment, education and immigration in South Florida.

She learned from Dr. Osvaldo Soto, the organization’s founding chairman and father of Chief Judge Berlita Soto. Under his guidance and that of Dr. Eduardo Padrón, president emeritus of Miami Dade College, she honed the skills she’d later use as co-founder, president and CEO of the South Florida Hispanic Chamber of Commerce (SFLHCC).

“Imagine me with this energy, working for those two extraordinary men who empowered and taught me everything I had to learn,” she said. “Later, it was easy to start an organization from scratch.”

The confidence they instilled in her, which she reinforced through her work, was crucial. Discrimination against immigrants and minorities was prevalent at the time. It was even more so against women. That remains the case in many ways today, she said.

In 1994, after quitting the Spanish American League to take care of her mother, who had fallen ill, she founded the SFLHCC. Friends and associates called for its creation, she said, and she answered the call.

“I never thought in my wildest dreams it was going to grow and become what it is today,” she said. “That’s how life is.”

Today, the chamber has a $650,000 annual budget. Ms. Lopez said it serves about 1,600 individual members, some 75 companies and regularly reaches tens of thousands of people through social media and its programming, including “A Business Minute with Liliam Lopez,” which is something of a spiritual successor to her prior TV work on WLRN and is one of several programs the chamber launched to help the community during the pandemic.

Guests include companies and politicians both local and national, including a former Florida governor and current senator, Rick Scott.

“It helped us generate revenue in the almost three months we were closed,” she said. “It’s become so popular now that we have a waiting list of people wanting to sponsor it.”