Advertisement
The Newspaper for the Future of Miami
Connect with us:
Front Page » Government » New Flagler ‘Festival Street’ design adds $10 million to cost 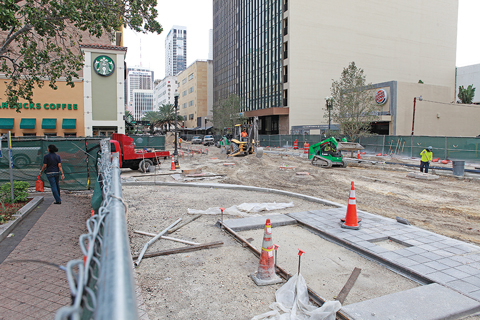 Prospects for the Flagler Street renovation – which has dragged on several years – are suddenly brighter, as leaders of Miami-Dade County, Miami, and the Downtown Development Authority pledged to pump more money into the project.

In February, the downtown authority, which has steered the project since its inception, agreed to consider suggestions by Moishe Mana, an investor who has bought a portfolio of Flagler Street properties. The Mana design would raise the roadbed slightly and eliminating curbs – as has been done in Midtown Miami and Miracle Mile in Coral Gables – to create a “festival street” that would be more open. “It’s a big-sky, tropical vision,” said Dylan Finger, Mana Wynwood managing director, then. “We looked at a broad range of designs.”

There was general agreement that the plan was better than its predecessor. The changes would take about 36 months to complete with the current contractor, and 42 months if a new request for proposals has to be issued, he said then. It would only affect the curbs and roadway; the sidewalks would remain the same, he added.

But the new plan costs a lot more. Authority directors heard Friday that the new budget will be $27.572 million, the shortfall created by the new plan would be $10.34 million, and the project will probably take four more years.

Chris Rose, Miami budget director, and Nzeribe Ihekwaba, assistant city manager and chief of operations, came up with another proposal. “The city can provide additional funds, but not the entire $10.34 million, or even the $6.54 million [remaining] after the county’s $3.8 million is applied,” said a document distributed to authority directors.

“So the city is proposing that the county provide true ‘halvsies,’ which means $4.17 million, not $3.8 million, with new additional city funding of $4.17 million. And, the city is proposing that the DDA contribute $250,000 for each of the next four years ($1 million) and that there be a second, one-time assessment of $1 million [to Flagler Street property owners], with the city funding its equity share of the second assessment, in addition to the above $4.17 million.”

“After a hard engineering review, we agreed that the city supports the expanded festival street concept,” Mr. Ihekwaba said. “The city should be able to fund some of the deficit, but not the entire amount. It’s only fair: if the county can up its offer, the city will match it, if the commission approves. The city is committed to getting this done.”

“The mayor is enthusiastic about funding the thing,” said Ed Marquez, county deputy mayor. “Ultimately, it must be blessed by the commission, but I’m sure if the city comes up with the money, we’ll match it.”

“We’re very pleased with the mayor’s support – it’s put gas in this tank,” Mr. Russell said. “This is going to be transformative for downtown. Everyone’s in love with the plan, but we have to decide whether we want to do this or not. I think it’s well worth it, if the city is pledging $4 million, to go back to Mayor Gimenez to see if the money is there.”

The money won’t come from the general obligation bond voters approved last November, he added. “This is a want, not a need. We have to spend $20 million to fix failing roads, and the climate on the commission is to start tightening belts. Chris has done a miracle here.”

“Thanks to Mayor Gimenez and the city, this is huge progress,” Mr. Kasdin said. “I do think we need to look seriously at filling the gap. This is not just any street.”

“This additional deficit is a surprise,” Mr. Alonso said. “But I’ll talk to the stakeholders and find out what’s agreeable to the community.”

“This is exactly the kind of project you invest in,” said Gary Ressler, authority board member and principal of the Tilia family of companies. He said he is confident owners on the street “will fill in the last million.”

Directors voted that the downtown authority will contribute the requested $250,000 per year for four years, beginning this fiscal year, but no more than that. “Make sure the resolution says, ‘But that’s it!’,” Mr. Russell told Barnaby Min, assistant city attorney, to laughter from the group.