Advertisement
The Newspaper for the Future of Miami
Connect with us:
Front Page » Business & Finance » Greater Miami Chamber of Commerce to advocate more, faster 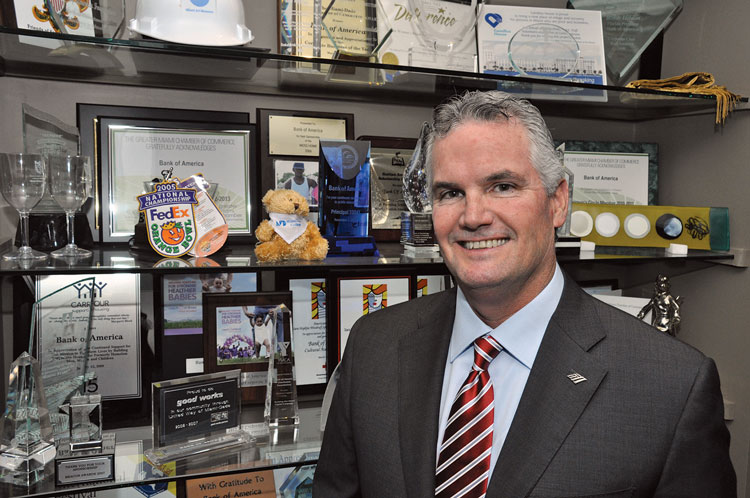 The Greater Miami Chamber of Commerce is looking to weigh in on community issues far more effectively than in the past, moving quickly to make the needs of business known when the chamber can make a difference, incoming Chairman Gene Schaefer said in outlining his aims for the year ahead.
“We want to increase our voice,” Mr. Schaefer said, because the chamber is “the voice of business.” Under his leadership, he said, he wants to make the chamber more responsive and quicker to speak out as an advocate when major issues arise.
Mr. Schaefer, the market president of Bank of America, takes over as chamber chairman this week during the chamber’s annual goals conference, replacing Mark Rosenberg, president of Florida International University. Each chairman’s term is one year.
In a broad look at how he sees his year as chairman, Mr. Schaefer also stressed in an interview last week the need for the chamber to help serve its members, asking “how do we put our clients at the center and help them grow their business?” One tactic he cited is to increase connections with and for chamber members.
The chamber, the largest business organization in Miami-Dade in terms of both membership and total employees involved in member organizations, has historically held a number of sessions during its annual conference, each session focused on the activities and aims of an individual committee. Each session selected the committee’s top three to six goals for the year ahead.
But this year, those sessions took place over the past month or so. Members thus come to the goals conference with aims for the year already in mind for each committee.
In a broader sense, however, Mr. Schaefer sees four main areas for the chamber to focus on in addition to the area’s key industries and international areas of concern.
Those four are the transportation challenges to the community, the issues surrounding workforce development and needs, resilience and sea level rise, and the new area of disruption, technology and innovation and how that rapid change is affecting the Miami business community.
Disruption came into focus for the chamber under Dr. Rosenberg, Mr. Schaefer noted, but “this is a journey” and innovation will remain front and center.
The past year was one of change for the chamber itself, as longtime CEO and president Barry Johnson transitioned into the presidency of the chamber-driven Florida Progress Foundation, the chamber hunted for new staff leadership and brought aboard as President and CEO Alfred Sanchez, former regional chief executive officer for the South Florida region of the American Red Cross, who has been driving the train for the past five months.
Now, with that change firmly in place, Mr. Schaefer said, “we’ve got to start making strong progress.”
Mr. Sanchez is aiming to develop a five-year strategic plan for the chamber as opposed to shifting aims each year as committees set new annual goals, Mr. Schaefer said. While there is a chamber plan that has been revised many times, Mr. Schaefer said, it’s time to revamp that document and live by it so that the annual goals of the chamber actually fit into its longer-term strategic plan.
A member of the chamber’s executive committee, Ralph MacNamara, has been added as the point person for that strategic planning effort. Mr. MacNamara is director of client services for Kaufman Rossin & Co. accountants and advisors.
The chamber has long had a succession of leadership built into its structure. Just as Mr. Schaefer replaced Dr. Rosenberg, Carlos Orta, the chamber’s first vice chairman and the vice president of corporate affairs for Carnival Corp., is to become chair in 2018.
At this week’s conference, it will be announced that Joe Atkinson, the South Florida region president for Wells Fargo, who has been the group chair for the chamber’s Marketing, Strategic Revenue & Membership Growth committees, will become first vice chairman and thus be in line to become chamber chairman in 2019.
Mr. Schaefer sees the same focus on succession being placed on the individual chamber committees, with a tactical continuity of vice chairs moving up to become committee chairs.
The chamber will also meet a concern voiced by some long-time members that the chamber get the best possible speakers for each of its monthly trustee lunches. To increase the overall speaker quality and impact, Mr. Schaefer said, the chamber plans to create a speakers bureau to help recruit the best possible speakers.
That effort might cause another alteration for the chamber, which has historically held its trustee lunches – long considered the top business networking events in the community – on the first Wednesday of each month. Mr. Schaefer notes that to get the best-known speakers, meeting dates might have to adjust to the speakers’ schedules, not adhere to a first Wednesday calendar.
Mr. Schaefer commented on what he sees as an impressive dedication by business leaders to the chamber, evidenced in the hours, events and panels they are involved with. He noted that he is building on the efforts of his predecessors, Christine Barney, CEO of rbb Communications, and Dr. Rosenberg. “It’s an exciting time for the chamber,” he said.