Advertisement
The Newspaper for the Future of Miami
Connect with us:
Front Page » Transportation » 9-year effort puts new fleet of Metrorail cars on the tracks 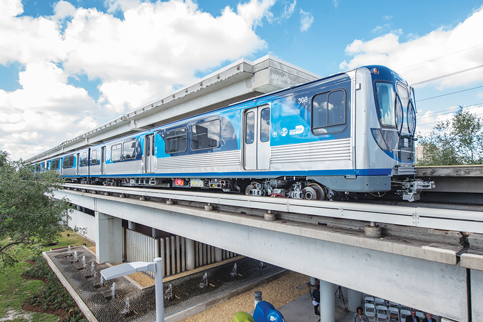 Almost nine years after efforts began to renew Metrorail’s aged fleet, 136 brand-new rail cars are running along the tracks. The last two, which arrived in February, are now rolling.

Efforts to renew the rail system began in November 2012, when the county contracted with Hitachi Rail Italy to renew the 31-year-old fleet then operating. But discussions about whether to rehabilitate or replace the existing fleet date back as far as 2002.

The delivery schedule for the Metrorail cars had at least two delays due to “unforeseen” situations. Miami Today reported in February that Miami-Dade first expected Hitachi to begin delivering its railcars by 2015, but the first of the new cars ultimately arrived in March 2017 and went into service that November as a four-car train, according to Buford Whitaker, former assistant director of rail services for the county.

A February 2021 press note from the Department of Transportation and Public Works (DTPW) points out that the assembly of the new Metrorail cars began in 2016.

In 2018 Steve Feil, transit deputy operations director, told Miami Today that, “short of anything catastrophic,” the last Hitachi railcar would arrive by late 2020. But they ultimately arrived in February 2021.

Mr. Feil explained that the schedule changed during a periodic update. “There were a lot of unforeseen conditions that happened: one was a force majeure item and the other one was a major flood that happened to one of the subcontractors when the shell [of the cars] was being built in Missouri,” he said.

Another major delay in Metrorail car delivery came in 2020 when the pandemic hit while some cars were still being assembled. Nonetheless, no major milestones on the schedules were missed, Mr. Feil stated.

Mr. Jones explained that “the $298.8 million is the contract cost that will be paid to Hitachi,” while “the $313.8 million in surtax funding includes engineering and other project-related costs.”

A testing facility was built for the new cars in department’s three quarters of a mile long Lehman Yard. “This facility is being used, and will continue to be used for various levels of testing,” Mr. Feil said. “It’s a brand-new facility and it’s a good acquisition.”

Similarly, Hitachi built a plant at Medley to assemble the Metrorail cars, according to information from Mr. Feil. Additionally, the company built a “quiet additional space for storage of parts.”

The new Metrorail cars have a life expectancy of 30 years, but if the county does a midlife overhaul in the major systems and subsystems, it could be extended 10 additional years, Mr. Feil said.

The cars face rigorous tests before the county accepts them.  Prior to this, the county rechecks their assembly, systems and subsystems. Then the department can begin shakedown runs, clearance testing, functional testing and final acceptance testing.

For instance, the county has to run a door functionality test a million times before a car is cleared for the final test.

“They go through a cycle where you have to operate the doors without failure during a million cycles… If you have one failure in the million cycles, this test starts over again,” Mr. Feil explained. After that, the railcars went through certification before they were cleared to run for passenger service.

Altogether, each railcar must meet 41 requirements and undergo up to four weeks of tests, including running 1,000 miles before being cleared to carry passengers, Miami Today previously reported.

The former railcars, meanwhile, are totally out of service. “We have already got rid of some of them,” Mr. Feil said. Others are still in the storage, but they’re to be discarded, either sold as scrap metal or in another form of disposal.

In a statement Feb. 25, Mayor Daniella Levine Cava called the final rail cars delivery “a major milestone for our county.” She also said that “with other major transportation and mobility initiatives currently underway, introducing the new Metrorail cars is an important way we are updating and improving the transit experience for riders.”

Joe Curbelo, chairman of the Citizens’ Independent Transportation Trust, which oversees half-percent transportation sales tax revenues, also expressed enthusiasm about the final delivery. “This has been a very important investment in the future of the county’s transit system,” he said, “and a vehicle fleet that the riding public can be proud of.”