Advertisement
The Newspaper for the Future of Miami
Connect with us:
Front Page » Transportation » Part of new electric bus fleet reserved for SR 836 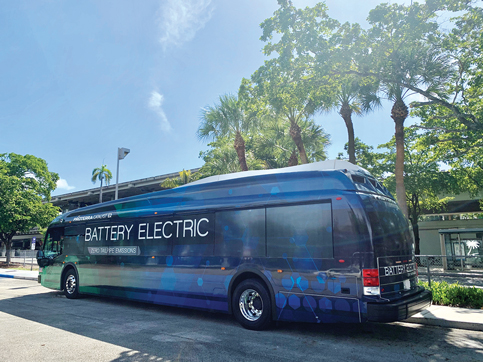 Of up to 75 electric buses Miami-Dade is buying from a California manufacturer, 10 will be reserved for express service on the 836 and none will run on the South Dade Transitway being upgraded for “gold standard” bus rapid transit (BRT), a transportation spokesperson said.

County commissioners in October 2019 approved a contract with Proterra Inc. for up to 75 40-foot plug-in buses. At the time, they OK’d an initial 33-bus order, which cost $29.6 million and included $4 million for three charging stations. Another $37.5 million may also go toward buying 42 more.

But because the Proterra ZX5 models won’t fit the 20-mile South Dade Transitway, known as the South Corridor in the county Smart Plan, another purchase of battery-powered buses is now underway.

In June, commissioners signed off on a deal with the Florida Department of Transportation to split the $9.5 million cost of buying 10 new e-buses for the 836 east-west express service linking Dolphin Mall to Miami International Airport and downtown Miami.

The state’s $4.7 million contribution will go toward paying Proterra, Mr. Espinoza confirmed, which the county expects to deliver the first ZX5 bus by June 2021.

“Then, [the Department of Transportation and Public Works] will test the vehicle and provide feedback to Proterra so they can make any necessary adjustments prior to delivering the rest of the 32 buses,” he wrote. “Once all adjustments are made, delivery of the remaining 32 buses is scheduled to start January 2022. A total of 10 Proterra buses are scheduled to be placed into service on the State Road 836 Express bus route.”

Mr. Espinoza said Monday that the prototype model was not a ZX5.

“The ones we’ll be getting will be different,” he said.

Over its expected 12-year lifespan, a zero-emission battery-powered bus will cut 1,700 tons of carbon dioxide, said the mayor, who has previously opined that more than half the county’s bus fleet should be electric by 2035.

Asked whether she anticipates complications from the pandemic to affect delivery of the Proterra buses or ongoing negotiations for South Corridor e-buses, Ms. Bravo told Miami Today, “I think it’s uncertain to say what the continued impact of the pandemic will be.”