Advertisement
The Newspaper for the Future of Miami
Connect with us:
Front Page » Business & Finance » Interactive kiosk bonanza back in focus for Miami Beach

Interactive kiosk bonanza back in focus for Miami Beach 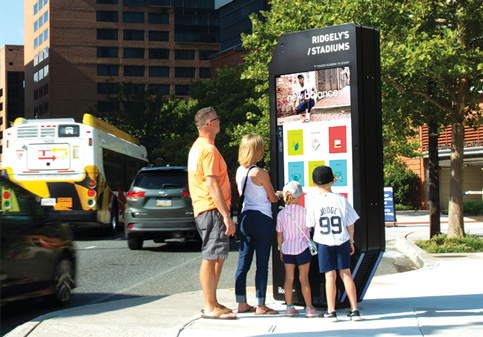 Miami Beach commissioners this week were to take another look at adding interactive kiosks to Lincoln Road and other high-traffic areas.

Commissioners began exploring high-tech kiosks in 2017, a commission memo states, but tabled the idea the next summer after soliciting bids from contractors, stating the project was premature.

Now, the city’s Finance and Economic Resiliency Committee is again planning to discuss the matter, which was referred to the committee in September after tech company IKE Smart City sent the commission a new proposal earlier this year.

The goal of the city’s initial 2017 request for proposal, the memo said, was “to assist residents and visitors by providing key information on shops, services and transit in the surrounding area while providing a source of revenue for the city.” As such, the administration solicited bids for a company to create such kiosks, and received five in March 2017.

An Evaluation Committee, it said, ranked Smart City Media and Orange Barrel Media as the top two proposers that December.

The commission shortlisted both companies for continued consideration, the memo said, and allowed them to present their plans at a July 2018 meeting.

However, “following presentations from the firms and substantial deliberations and input from members of the general public,” the memo said “the City Commission declined to accept the City Manager’s recommendation to award a contract for digital media displays.”

At the time, the memo states, commissioners considered the technology “untested” and decided it didn’t make sense to install new kiosks on Lincoln Road before undertaking the Lincoln Road Master Plan to revamp the street.

IKE’s proposal notes the commissioners past concerns about installations being “premature.”

“Since (2018),” it said, “IKE has installed several interactive kiosks in Coral Gables, and was recently awarded the right to install over 100 kiosks throughout Miami.”

According to the proposal, IKE hopes to pre-pay the city $1 million to install 30 kiosks, an expense it expects to regain from advertising revenue. The installation, it said, will be at no cost to Miami Beach.

Notably, Miami Today reported in September, the Lincoln Road Master Plan may be re-written to eliminate the mass removal and reconstruction of sidewalks, which was part of the original plan.

Removing this piece of the plan, said Tim Schmand, executive director of the Lincoln Road Business Improvement District, would save the city money and be less disruptive to recovering local businesses.