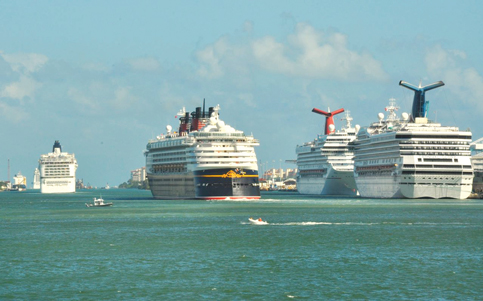 As the US cruise industry enters its seventh month of inactivity due to Covid-19, Miami-Dade is eyeing a plan that could forgive more than a quarter-billion dollars that cruise lines would otherwise have paid PortMiami.

A worst-case scenario in which cruise lines remain docked for two-plus years would see the port lose $271.5 million and be forced to dip into reserves to remain operational past April, a memo from Deputy Mayor Jack Osterholt said.

In exchange, Miami-Dade would ask only that cruise lines continue to guarantee vessel calls, maintain passenger volumes here relative to other US ports and possibly meet added requirements “on a cruise line by cruise line basis.”

Commissioners in the Tourism and Ports Committee today (10/15) are to give first consideration to the proposed plan from Mayor Carlos Giménez’s administration. A final vote is due Nov. 19.

County estimates place PortMiami revenue shortfalls at about $68.5 million from March 13 to Nov. 29 – a period the county is tentatively calling the first of two port recovery phases – during which the port waived all passenger guarantees, harbor fees and other regular payments for cruise companies with berthing or operating agreements there.

But if no sailing occurs, PortMiami “could forgo the approximately $7 million in monthly guaranteed revenues for 24 months.”

If the federal no-sail order continues this year, the port could lose another $7 million monthly for up to seven more months before the second phase starts.

A cruise line could opt to revive its regular port operations 11 months into phase two; however, companies that do so would have to meet passenger guarantees in order to receive incentives offered in their berthing and terminal contracts.

The item would also authorize the mayor’s office to renegotiate PortMiami’s ground lease with Royal Caribbean International but provides no details on what aspects of the deal are subject to change.

In May, PortMiami Director Juan Kuryla told Miami Today he and staff were “working hand-in-hand” to redraw terminal deals with its partners at the “Cruise Capital of the World” to help them shoulder costs.

“It does no good to be in a situation where we’re fighting over [minimum annual guarantees], knowing what the situation in the world is right now,” he said.

MSC Cruises – which last year signed a 62-year, multibillion-dollar deal with the county – agreed in July to rescale and reschedule its port plans, including an added provision to build an additional terminal next to its planned “mega terminal” for joint use by Disney Cruise Line.