Advertisement
The Newspaper for the Future of Miami
Connect with us:
Front Page » Government » Cruise lines that can’t sail get another fee break

Cruise lines that can’t sail get another fee break 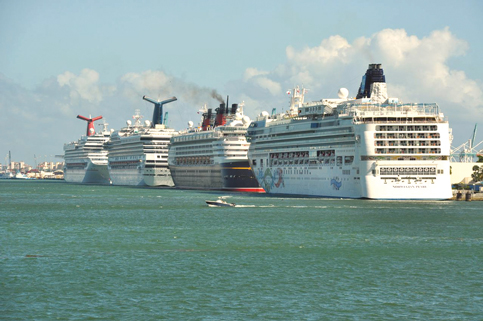 Concerns over covid may be receding alongside looser safety guidelines and business re-openings. But travel operations from the “Cruise Capital of the World” won’t resume until next month at the soonest.

On Monday, Mayor Daniella Levine Cava announced an extension to the waivers through July 30.

“Cruising is a cornerstone of Miami-Dade’s economy, and we are committed to restoring this vital industry in the months ahead,” she said in a statement.

Miami-Dade commissioners approved the waivers unanimously and without question Oct. 22 through a resolution by Rebeca Sosa.

Waived fees include passenger guarantees and other regular payments that cruise companies with berthing or operating agreements at PortMiami must normally pay. Cruise companies, in exchange, must still guarantee vessel calls at the port, maintain passenger volumes here relative to other US ports and possibly meet other requirements “on a cruise line by cruise line basis.”

Were cruise ships not to sail from Miami for more than two years, a worst-case scenario according to former Deputy Mayor Jack Osterholt, Miami-Dade would lose $285.5 million.

Mr. Osterholt’s projections also included a prediction that unless PortMiami saw additional revenues over that period, the port would be forced to dip into reserves to remain operational past April.

However, internal savings, strong cargo traffic and favorable financing have positioned the port to operate and cover costs, including debt service on bonds, without tapping into its savings through the end of the fiscal year, Managing Port Director Andy Hecker told Miami Today in February.

The new deadline by which the port would have to start spending its savings to cover debt service, he said, is “between September and October 2021.”

Beyond that period, PortMiami Director Juan Kuryla recently told WLRN, the port could at worst spend $28 million of its reserves.

Fortunately, despite disagreements in Florida between some companies and Gov. Ron DeSantis over what precautions there should be to prevent onboard super-spreader events – mandatory masking, vaccine passports and pre-board screenings among the safety measures discussed – cruise voyages appear to be returning.

Last month, after the Centers for Disease Control and Prevention OK’d published guidance, Carnival, Royal Caribbean and its subsidiary Celebrity Cruises quicky announced plans for test cruises in Florida, some from Miami, starting this month.

Volunteer passengers on the cruises must be 18 or older, wear masks onboard, adhere to social distancing and agree to pre-board screenings for the virus, plus follow-up tests every three to five days.

If at least 95% of passengers and 98% of the crew are fully vaccinated, the CDC said May 26, cruise companies can forego test sailings.

Earlier that month, Mr. DeSantis signed a law banning businesses that operate in Florida, including cruise lines, from asking customers for proofs of vaccination.

He said the legislation “ensures that legal safeguards are in place so that local governments cannot arbitrarily close our schools or businesses,” adding: “In Florida, your personal choice regarding vaccinations will be protected, and no business entity will be able to deny you service based on your decision.”