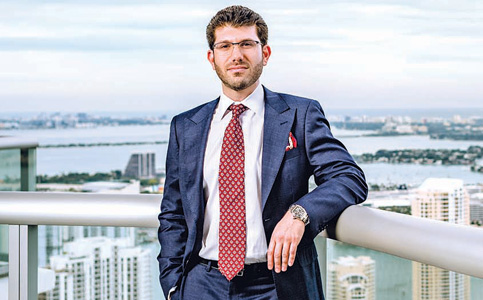 Here’s a bit of trivia every Miamian should know: What is the tallest skyscraper in Florida, as well as the loftiest residential building south of New York?

Austin Hollo, senior vice president of Florida East Coast Realty (FECR), calls it the “crown jewel” of his family’s business, which over more than 60 years has developed some 60 million square feet of real estate under the guidance of Tibor Hollo, his grandfather and the company founder and chairman.

To hear him describe it, Panorama Tower, which topped off in 2017, is what young Miami residents dream of when envisioning life in the tropical city. Its more than 100,000 square feet of amenities include three movie theaters, dining and wine tasting rooms, cyber cafés, social and sports lounges, and a fitness center with yoga, Pilates and spinning studios.

For families, there’s a children’s playroom and a splash pad on Panorama’s pool deck, which he said is “getting a lot of use,” and provisions geared toward the on-demand inclinations of millennials, including retail and space for rideshares and food delivery.

“If you live there, you never have to leave the building if you don’t want to,” he said. “We tried to build a mixed-use campus there. It’s all about the live, work and play concept.”

Mr. Hollo joined FECR in 2009 as the third generation of the family to do so, following his father and uncle, Wayne and Jerome, respectively. He’d previously worked for two years as an analyst in LNR Partners’ Real Estate Finance and Servicing Group, but the plan was always to work for FECR.

“It was never imposed upon me or expected of me, but I’ve been exposed to it my entire life. I took some finance classes in high school and college, did a few real estate internships on the brokerage and lending side because I’d seen the development side with the family,” he said. “It’s something I’ve always been attracted to, and I can say this: all nepotism gets you is an opportunity. If I couldn’t cut it, I wouldn’t be here, and I appreciate that I’m a vital part of the team now.”