Advertisement
The Newspaper for the Future of Miami
Connect with us:
Front Page » Arts & Culture » Two-building mural a tribute to Black US history

Two-building mural a tribute to Black US history 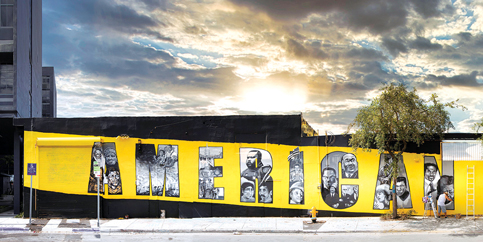 In tribute to the Black Lives Movement and Black US history, The Museum of Graffiti is presenting a large-scale mural on the walls of two buildings at Northwest 25th Street and Third Avenue in Wynwood.

Focusing on significant Black events or individuals in US history starting from the early 1800s through current-day movements, the mural, entitled “AMERICAN HISTORY,” highlights police brutality, racial injustice and resistance.

“The mural is aligned to call attention on the Black Lives Movement. We curated the artwork and sourced eight local artists to execute the concept,” said Allison Freidin, co-founder of the Museum of Graffiti, which opened in December 2019 during Art Basel Miami Beach and Miami Art Week.

American history is spelled out across the two adjacent buildings with what looks like police caution yellow strip tape and, in each letter, artists tell the history of prominent Black individuals and experiences.

The mural was curated by Alan Ket, who is also the museum’s co-founder, with a dozen QR codes that will educate visitors with an audio interactive recording, including of Dr. Martin Luther King’s “I Have A Dream” speech, music from Public Enemy and a Black Panther rally, Ms. Freidin said, and with the expertise of Professor Paul Ortiz of Duke University, who was sought out to advise on the historic portion of the art graffiti mural.

Viewers will learn with the help of historic faces, like Nat Turner, a Black American slave who led the only effective, sustained slave rebellion; John Brown’s raid on Harpers Ferry; Fredrick Douglass; Marcus Garvey, who founded the Universal Negro Improvement Association and African Communities League; and the massacre of African Americans in Tulsa, OK, aka Black Wall Street in 1921 – to name a few.

“These are a very diverse group of well-known local artists who were selected based on their talent,” Ms. Freidin said.

The Museum of Graffiti, which is across the street from the mural at 299 NW 25th St., will unveil a new art exhibition starting July 18 called “Protest Engages on Denim Jackets,” by different local artists, which will also include an eight-minute and 46 second countdown of silence in remembrance of George Floyd’s death, Ms. Freidin said.

“We will only have six people inside the museum at a time and rotate every 16 minutes,” she said. “That’s why it’s important and we encourage people to purchase tickets in advance, so there are no contact interactions, once they get to the museum.”

With the help of Moving the Lives of Kids Community Mural Project, the mural was brought to life by eight South Florida based graffiti artists, who include 1DER; E-Tone; Cyst; Cale; Kyle Holbrook; Tierra Armstrong; Black Brain and PHD.

Raised in Miami by parents from Barbados, 1DER [[pronounced Wonder] said as an artist, it’s an opportunity to bring uncomfortable discussions where people can grow from.

A lot of people don’t leverage how important this history is, and that is why adding a personal touch and style will make sure the mural will highlight and bring awareness to Black history that is not necessarily being told in schools, 1DER said.

“I would implore people to generate some intrigue to look up these individuals [being depicted in the mural] …. We can create an educational level as well and start a conversation – especially when you are visiting the mural and ask questions, which will be the only way we can grow in this country and be our best selves,” he said.