Advertisement
The Newspaper for the Future of Miami
Connect with us:
Front Page » Top Stories » Moss floats plan for short-haul sky gondola transit 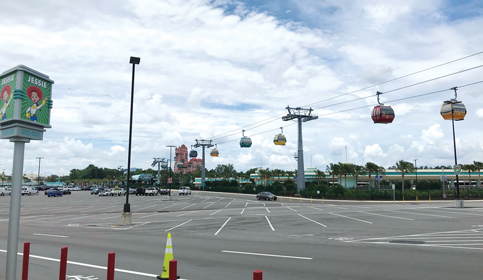 Miami-Dade travelers today cross the county in a variety of ways, from personal vehicles, buses and railcars to boats, rideshares and e-scooters.

According to Commissioner Dennis Moss, another piece may fit into the county’s growing mobility puzzle: sky gondolas.

Since then, he said, he and the company behind the roughly $3 million project, Austrian ski lift manufacturer Doppelmayer Garaventa Group, had talked about the potential of installing them elsewhere in the county.

“I’m looking at that to explore maybe some short-haul opportunities to move people around,” he said.

While Disney has yet to disclose the cost of the system, the Reedy Creek Improvement District, which has governing jurisdiction over the land of Walt Disney World Resort, paid $3.8 million for its electric system alone, the Orlando Sentinel reported.

“They’re using that as a way to get people off the roads,” Mr. Moss said.

Of multiple configurations considered, consultant personnel most highly recommended a 1.2-mile, two-station route between Marlins Park and Government Center downtown due to its “much lower capital and operating costs than the other alternatives” and link to “a major entertainment venue.”

Not counting the cost of land for stations, permitting and community coordination, the system reportedly would cost $35 million to build, including a 25% contingency factor, and $2.8 million yearly to maintain.

For comparison, the 2.4-mile Metrorail Orange Line from the Earlington Heights station to the Miami Intermodal Center cost $506 million to complete, a three-station addition to Metromover was estimated to cost $260 million, the local cost for Tri-Rail Downtown Miami Link was about $70 million and a 10-mile commuter rail service between Miami International Airport and Florida’s Turnpike under the 826 expressway was $100 million without including right-of-way acquisition costs.

“Compared with other transit investments under consideration, the overall capital cost of the potential route is comparatively modest,” the report said.

Further, the report said, the system would be eligible to receive funding from the Federal Transit Administration’s Small Starts or TIGER Grant programs and could get ongoing financial assistance from existing federal programs.

“Once funding and permits are in place, actual construction of the system would be reasonably quick, typically in the range of 12 months or less,” the report said. “The stations and terminals are the only substantial civil works required for the project. Erecting the towers and stringing the cables for a 5,000- to 7,500-foot system could be accomplished in a matter of weeks.”