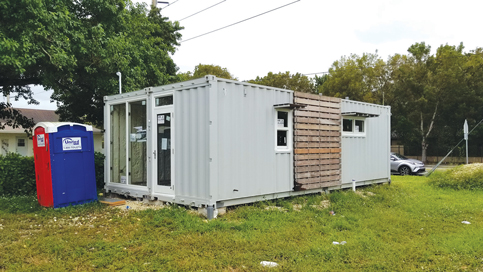 A test project to turn a shipping container into a tiny home on a small parcel in South Miami is near completion more than a year after Miami-Dade lawmakers narrowly gave it the OK.

The 480-square-foot container is on-site and on blocks on a corner lot that would otherwise be undevelopable had the county and city not made exceptions for the project.

It has glass doors, interior insulation and a wooden façade between two front-facing windows that overlook the street at 6180 SW 63rd Terr.

“I drove by it the other day, took a look at it,” said Commissioner Xavier Suarez, who sponsored the item approving the project late last year. “I’m not sure it’s 100%. It begs for a little shade and landscaping, maybe something to dress it up a bit.”

While that assessment is on the mark, it’s not for lack of effort to get things done quicker, said Danielle Blake, chief of public policy for the Miami Association of Realtors.

Ms. Blake said that she expects the project to be finished next month. It could have ended sooner, she said, if not for unforeseen developmental roadblocks.

Connecting the home’s plumbing to the county sewer system hookup across the street is no easy task, she said; it requires tearing up and then fixing the roadway, which requires permits, work orders and disrupting neighbors and travelers through the area.

The problem, she said, is that the county tore up the road once already but not for that purpose.

“The county did the water connection. As I understand it, they also had to break through the street,” she said. “But the sewer lateral, which is also under the Water and Sewer Department, is done privately through a general contractor.”

In exchange, the association agreed to take on the project – meant to demonstrate the feasibility of a broader container home program – and then sell it at-cost with a maximum price in accordance with the Infill Market Price of 80% of the area median income.

Esteban Bovo Jr., then the commission chairman, agreed to seek waivers of all county and city fees possible to lower costs.

Ms. Blake told county commissioners that total construction costs were $133,699, not counting another $37,000 in land costs.

Detractors of the project said it was wasted land that could be better developed in other ways and argued its price was exorbitant compared to similar projects elsewhere.

But others, like Jean Monestime, a real estate businessman, defended the project’s scope and ambition.

“I thought we were going to applaud them for bringing this item forward and approve it with a unanimous vote, because I think this is daring,” he said, voting yes with Mr. Suarez, Daniella Levine Cava, Sally Heyman, Eileen Higgins, Barbara Jordan and Dennis Moss.

Jose “Pepe” Diaz was absent from the vote last year.

“As a prototype, we managed to convince – with a lot of help from Commissioner Monestime – that this is worth trying,” Mr. Suarez said last week.

The price is “not a good finance model” for widespread adoption, he said – but that isn’t the point.

“The idea is to evaluate this,” he said. “If it works, it deserves to be considered [and] could be a significant number of units countywide.”

Miami Realtors then-Chairman George Jalil told Mr. Suarez in an Aug. 10, 2018, letter that the association had received an $80,000 grant from the National Association of Realtors to build the home. The association, he added, would add to the funding.

Miami Realtors and the South Miami Community Redevelopment Agency also committed to provide the future buyers with down payment assistance on the home, built by Miami-based Cobo Construction and Little River Box Co., the developer behind the Charcoal Garden + Bar Grill container restaurant in Wynwood Yard.

Ms. Blake told commissioners at the time that 80% of the median income in South Miami was about $44,100. With the planned down payment assistance, she said, the monthly mortgage payments from the buyer would be roughly $1,132.

Miami Realtors also agreed to deliver to commissioners a report on the project, including details on what obstacles the association and developers encountered.

Naturally, she said, the sewer issue will make the list.

“That’s the one we’re going with,” she said. “Since South Miami doesn’t allow for patchwork, we have to resurface the entire street, adding another cost we didn’t see coming. And why are we duplicating services? It all falls under the same department. If you’re talking about affordability and what the barriers are, we’re paying twice to go through that street.”

That unexpected clog in the proverbial pipeline and other difficulties related to the project, she said, will inform future replication efforts.

“I’m really glad we did this, because a lot of it has nothing to do with containers,” she said. “People who do this day in and day out in construction know about these issues. We didn’t, so it’s great the county is looking at the project. We can highlight what some of those barriers are.”