Advertisement
The Newspaper for the Future of Miami
Connect with us:
Front Page » Government » Freebee transit in Mid-Beach becomes permanent 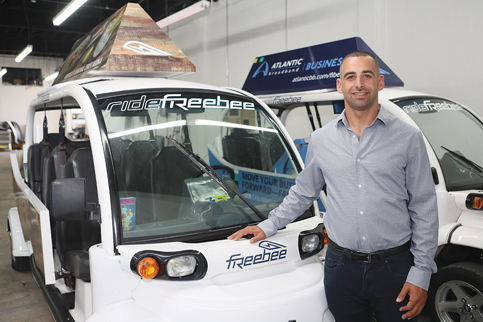 The Miami Beach Commission gave the green light last week to the administration to memorialize the city’s agreement with Freebee, with commissioners acknowledging that alternative transportation is vital in the area.

José Gonzalez, the transportation director for the city, said, “The six-month pilot has shown that there is value in providing this first-mile, last-mile type of service in the Mid-Beach area, which is an area that is not served by our trolley service.”

Freebee is a local company that has become ubiquitous across the county with its fleet of electric on-demand vehicles aimed at providing short-distance rides. The company currently operates in various municipalities, including the City of Miami, Coral Gables, some neighborhoods in Miami Lakes and Pinecrest, as well as operating in Fort Lauderdale and Islamorada in Monroe County.

Commissioner Ricky Arriola argued that Freebee is safer than alternatives, such as the city’s trolleys and riding bicycle. He added that Freebee provides tracking information.

“If we are going to start disparaging things, you got to really think it through,” Mr. Arriola said. “I think this actually is safer than almost everything else we have other than your own parents driving you to where you got to go.”

Commissioner Michael Góngora, the sole no vote, said he was uncomfortable with Freebee driving through the Mid-Beach residential area with advertisements.

“I do like the freebees very much in Coral Gables, where I happen to work because they run through the commercial corridor…,” he said. “I haven’t loved them as much in Miami Beach.”

Mr. Spiegel said the city can choose to forgo advertisements, revenues from which are split between the city and Freebee, as well as change the age limit of those serviced. Mayor Dan Gelber suggested passing the legislation and revisiting the agreement afterward if needed, with many parents relying on Freebee to get their children to and from school.

The current six-month pilot program, which was set to expire Dec. 31, will be renewed on a month-to-month basis for up to 90 days as the administration hashes out an agreement with Freebee. The permanent agreement is to run for three years.

While the pilot currently consists of three vehicles servicing Mid-Beach, the agreement calls for two vehicles. The service currently operates from 6:30 a.m. to 10 p.m. Monday to Saturday and from 8:30 a.m. to 10 p.m. Sundays. The city would change Sunday’s cut-off time to 8 p.m.

According to the city memo, the annual cost to run the program for three years will be $194,000 with advertisements and $254,000 without advertisements. Funding for the service depends on the city commission’s future approval of a budget amendment to transfer the necessary funds from the parking fund to the transportation fund.