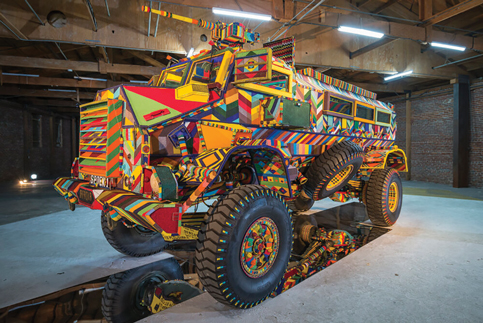 If the jewel in the Art Basel crown is the main event inside the Miami Beach Convention Center, a rich variety of satellite fairs add their own sparkle. Here are some of them:

Celebrating its 19th year, SCOPE Miami Beach returns to the sands at Ocean Drive and Eighth Street. “Honoring its perpetual mission to provide a platform for discovery, SCOPE will welcome 134 diverse contemporary exhibitors featuring The New Contemporary, a genre that stands as a critical contribution to both global politics and local community engagement,” organizers said in a release.

“New to the pavilion this year is OASIS, an experiential multidisciplinary program located in our expanded Atrium. OASIS will present daily programming featuring large scale installations, music performances, and panel discussions while continuing our long-standing commitment to wellness,” the release continued.

For a more global perspective, fairgoers should seek out FOCUS | ART CHINA, a part of SCOPE Miami Beach that presents works from both established and emerging artists spanning across disciplines. SCOPE Miami Beach runs through Dec. 8.

Art Miami, the oldest satellite fair, celebrates its 30th anniversary with a line-up comprising works from 170 galleries from around the world. “Its opening serves as the unofficial kickoff to Miami Art Week,” said a release from organizers. “Expect this milestone year to feature tons of blue-chip pieces from well-known artists like Roy Lichtenstein, Jeff Koons and others.” The fair is at One Herald Plaza on Biscayne Bay and Northeast 14th Street. Dec 3-8.

Also at One Herald Plaza is CONTEXT Art Miami, a sister fair to Art Miami, which this year features works from 95 galleries. “Launched in 2012, CONTEXT Art Miami’s open atmosphere creates a meaningful dialogue between artists, galleries and collectors while providing the ultimate platform for the presentation of mid-career, emergent and cutting-edge talent by emerging and established galleries,” organizers said in a release. “The combined efforts of CONTEXT Art Miami and Art Miami provide a unique and alternative opportunity for leading primary dealers and their artists to be marketed and promoted internationally during the most important week for contemporary art in America,” the release continued. The show run from Dec. 3-8.

Founded in 2005, PULSE Art Fair will feature more than 60 exhibitors this year at Miami Art Indian Beach Park in Miami Beach. “The fair allows visitors to experience the energy of stimulating art and balance it with cocktails in hammocks and engaging conversations with friends over a meal in our restaurant,” a release said. Top exhibitors include South African artist Ralph Ziman, whose The Casspir Project is a celebration of that country’s creativity and community despite Apartheid. PULSE also includes The Next Generation, a platform for breakout artists not yet represented by a gallery, and several ancillary programs and events.

Design Miami, now in its 15th year, has a new location at Pride Park, directly across from the entrance to Art Basel at the Miami Beach Convention Center, and includes a reconfigured tent for its inaugural Design Forum, presented by SCAD. “This new area will feature a glass façade, giving passersby a full view of the cultural programming scheduled throughout the week. Water is the curatorial theme and visitors can plan to see it expressed in works on display at Curio (the fair’s exhibition platform) and in the Galleries section, which this year pays homage to vanguard female designers of mid-century design, including Charlotte Perriand, whose work is currently on display at the Louis Vuitton Foundation in Paris,” said a release. It runs from Dec 3-9.

PINTA Miami is perhaps the most well-known fair for Latin American and Hispanic art. This year, it celebrates its 13th edition, with participating 60 galleries representing more than 300 artists from around the world. “One of the most notable works this year is a virtual reality collaboration between renowned Argentinian artist Julio Le Parc and his son Juan. The site-specific installation, 7 alchimies en réalité virtuelle, premiered earlier this year at the Palais de Tokyo in Paris as a special commission by Alejandro Martin (Spain, 1974),” organizers said. PINTA Miami is being staged at Mana Wynwood, 2217 NW Fifth Ave., from Dec 4-8.