Advertisement
The Newspaper for the Future of Miami
Connect with us:
Front Page » Arts & Culture » Wynwood plans to control street art for Art Basel 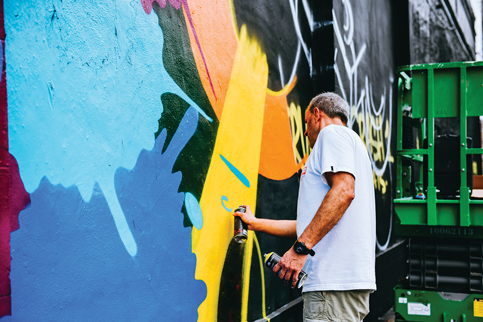 With the biggest art week in the Northern Hemisphere on the horizon, Art Basel plans are coming together rapidly in Wynwood.

“We need to create a list of our needs and wants,” said Manny Gonzalez, executive director of the Wynwood Business Improvement District (BID), at the group’s recent meeting. He added that he will work with the Miami Police Department and the city manager’s office to be sure the district has the capacity to deal with the crowds, which are generally voluminous during Art Basel Week.

As of this week, the decision has been made to close Northwest Second Avenue, Wynwood’s main drag, for Friday, Saturday and Sunday nights, Mr. Gonzalez said. The closure will be in effect the whole breadth of Wynwood, which runs from Northwest 20th to 29th streets.

Traditionally, the BID requests a 5 a.m. cut-off time for alcohol service (two hours past the regular closing time) during the event. A request has been submitted to the city commission but not yet granted, he said. “They’ve been kind enough to do it in years past, and we hope they’ll do it again this year,” he said. “The businesses really count on it.”

“We have requested a large number of police officers for Art Basel, and we’re confident Chief [Jorge] Colina will approve,” Mr. Gonzalez said.

“On Halloween, we had 137 police officers, which is the largest number ever recorded in Wynwood,” he said. “We had 120,000 people in attendance, and only three arrests. It was a very successful Halloween, which goes to show you that having a police presence works.”

The security cameras the BID purchased came on line that evening and were a definite help, he added.

The business group asked the city’s Public Works Department to pick up trash early in Art Basel Week and daily from Tuesday through Sunday, he added. The city is also supplying extra trash cans during that week.

At the meeting, Mr. Gonzalez asked all the business owners present to inform the BID in writing, and well in advance, if they are authorizing any artist to paint a mural or drawing on their buildings. In years past, amateur and professional artists from all over the country have migrated to Wynwood with brush or spray paint in hand, and many say they have the owner’s permission to create street art.

“Outsiders come in and bomb the neighborhood [with paint],” Mr. Gonzalez said. “Let us know if an artist has your permission to be there.” A mural permission form can be found on the BID’s website.