Advertisement
The Newspaper for the Future of Miami
Connect with us:
Front Page » Top Stories » County violations may net firm $96 million copter sale 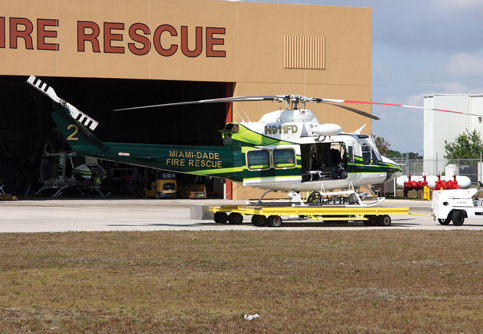 After nearly five years of procurement and a long ethics investigation that found 100-plus lobbying and communications violations, Miami-Dade lawmakers today (10/3) are to determine whether to pay $96 million to the company whose employee broke the laws.

County commissioners are to weigh awarding a five-year contract to helicopter manufacturer Agusta Westland for four new helicopters to replace the county’s four that, at 16 to 19 years of age, have outlived their usefulness.

The item has been in limbo since July, awaiting a report from the county’s Commission on Ethics on potential wrongdoings by Agusta Regional Sales Manager Christopher Sirkis between December 2014 and September 2016.

During that period, according to the ethics commission report delivered in August, Mr. Sirkis engaged in illegal communications with three county employees – Fire Rescue Division Chief Antonio Hernandez, pilot Alvin Guthery and Technical Advisory Captain Jeffrey Suarez – whom Mayor Carlos Giménez appointed to advise the county on who should get the contract.

None of the three county employees nor Mr. Sirkis said they could once recall the subject of more than 100 phone calls, texts and in-person conversations.

Of the three county employees, Capt. Suarez’s communications with Mr. Sirkis and other Agusta personnel represented “the most alarming and worthy of an in-depth review,” Commission on Ethics Executive Director Jose Arrojo wrote in a memo to Deputy Mayor and Interim Fire Chief Maurice Kemp.

Capt. Suarez, he continued, engaged in a “repeated, continual and significant number of calls, texts and face-to-face meetings … during critical stages of the pending solicitation” – 65 instances known altogether – despite knowing at the time that a Cone of Silence ordinance was in effect.

Miami-Dade’s Cone of Silence law bans oral communication during county bid request and evaluation periods, as well as written communications that aren’t also sent to the clerk of the county commission.

The timing of Mr. Sirkis’ exchanges with Capt. Suarez and the other two men “serves to illustrate [their] questionable nature,” Mr. Arrojo wrote, as they took place before, during or after key solicitation events, reviews or official email exchanges.

“It strains credibility to believe that some of these estimated 65 exchanges did not involve substantive discussion about the solicitation,” he wrote.

Less than a year after the ethics commission launched its investigation, the State Attorney’s Office accepted jurisdiction of the investigation and filed a sworn complaint that uncovered further unauthorized communications by Mr. Sirkis.

But because the State Attorney’s investigation didn’t end until Nov. 2, 2018 – 20 months later – statutes of limitation for administrative action lapsed on “a significant number of potential violations” under the purview of the ethics commission investigation.

Further hindering matters, Mr. Arrojo wrote, was that the State Attorney’s Office failed to interview any of the county Fire Rescue employees identified as possible violators or obtain warrants for the substance of text communications between Mr. Sirkis and county personnel “due to a lack of probable cause.”

The ethics commission ultimately found a lack of sufficient evidence to file ethics complaints against Capt. Suarez, Mr. Guthery and Mr. Hernandez, though the same could not be said for Mr. Sirkis, whose violations led to a $6,000 settlement in fines and costs with the county, a plea of no contest to five counts of illegal lobbying and Cone of Silence violations, a letter of reprimand, and an agreement to provide “truthful testimony” regarding the investigation.

With that mess finished, Mayor Giménez told commissioners in committee last month, the county should move on and finishing a process almost a half-decade in the making.

And the contract should go to Agusta, he said, despite recommendations from county and third-party advisors that Miami-Dade should stick with manufacturer Bell Helicopter Textron, whose aircraft the county has used for decades.

Both the initial 2014 procurement in which Mr. Sirkis was involved, as well as a subsequent process wherein no issues arose, resulted in recommendations that the county buy Bell 412 helicopters, even though Agusta’s AW-139 helicopters were deemed better for capability, value and safety.

One big reason Bell has been repeatedly been chosen despite those discrepancies, Commissioner Sally Heyman said, is that other fire departments that opted to switch to Agusta from Bell have had great difficulty doing so.

Especially troubling, she said, was information given by staff from the Los Angeles Fire Department, who advised the county’s selection committee.

Seven years after buying Agusta helicopters, Los Angeles Air Operations was still using its prior Bell fleet, she said, because it had yet to transition fully to the new aircraft.

“I guess that goes to compatibility,” she said.

That concern notwithstanding, the mayor said, Agusta helicopters are otherwise superior “in every way” and meet the needs of Miami-Dade Fire Rescue much better than those from Bell.

Aside from being certified to meet the fire department’s most recent standards – unlike the Bell 412 – Agusta’s AW-139, he said, is significantly faster, beats Bell in per-fueling flight range by more than 200 nautical miles, can carry 3,000 pounds more, can safely fly and operate on one engine, and is the only helicopter in existence that can fly for an hour with no oil in its transmission.

They’re also more capacious, capable of carrying 17 people compared to 15 in the Bell, he added, and they’re cheaper too; each Agusta helicopter plus its accompanying equipment costs close to $1 million less than a Bell.

Bell representative Jose Felix Diaz, executive vice president of lobbying and PR firm Ballard Partners, did not dispute the figures and specs Mr. Giménez listed. But there is indeed no comparison between the two companies, he said, because only Agusta repeatedly broke the law.

For three years, he said, not one Agusta representative registered with the county as a lobbyist, and the company, disqualified from the initial procurement, was only in the mix today because the process needed to be restarted due to the company’s criminal actions.

“[This is] an attempt to reward the single worst violator of Cone of Silence laws in the history of this county,” he said. “When you’re talking about a [multimillion-dollar] procurement, how can I tell my clients not to violate the [law] if the worst they’re going to get is a $6,000 fine? What will be set here today is a terrible precedent.”

As it stands, it’s “a comedy of errors,” Commissioner Xavier Suarez said.

Commissioner Jose “Pepe” Diaz agreed, lamenting, “This is the most messed-up, ugly procurement I have ever seen in my history of being in public office.”

Mayor Giménez didn’t argue with that sentiment. But the people responsible for the issues “are being dealt with,” he said, and what the county should do now is get the best deal and product possible, and that’s the Agusta helicopter.

“It would be much easier for us to come and say, ‘Let’s go with Bell,’ but sometimes the easy thing is not the right thing,” he said. “This is hard. We’re going to be criticized. But at the end of the day we need to go with a better capable aircraft that will save lives.”