Advertisement
The Newspaper for the Future of Miami
Connect with us:
Front Page » Government » Corporate jet hub eyed for Homestead Air Reserve Base 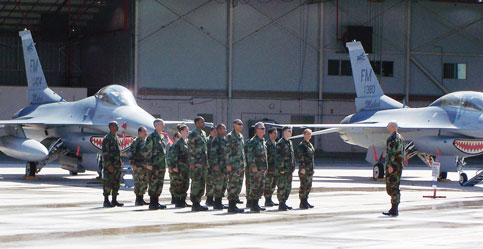 A 2020 county effort to sign an agreement with the Air Force that could bring corporate jets and cabin-class helicopters to the Homestead Air Reserve Base is still awaiting an Air Force response.

The runway for the effort has been long and takeoff remains in holding mode.

Conversations between the parties date back to 2015, when county commissioners approved a first resolution directing the mayor to begin negotiations and pursue a joint use agreement.

Following the instructions of the 2015 county commission resolution, in 2016 the mayor’s office wrote to then Base Commander Col. David P. Garfield, expressing the county’s desire for a joint use agreement with the Air Force to use the Homestead base for civilian flying facilities, a fixed-base operation.

A June 2021 memorandum from Mayor Daniella Levine Cava summarizing the project’s flight pattern explains that the letter was forwarded to Air Force headquarters for evaluation and later in June 2016 forwarded to the Federal Aviation Administration for review.

“Through verbal communications with the USAF [Air Force], county officials were advised that it takes approximately one to three years to complete a joint use agreement with the USAF,” the document says.

The county originally requested a “ready to build” site just outside the base fence line in the northeast corner, with direct access to the airport ramp and to existing sewer, electrical, phone, and water infrastructure.

The county owned that site, part of its “600-Acre Economic Development Conveyance” from the Air Force in 2004, so it would not have to buy additional land outside of the base property line.

The site was initially proposed to the Air Force as a possible suitable location, according to the mayor’s report. Nonetheless, a Feb. 28, 2020, letter to the former mayor from Jennifer L. Miller, principal deputy assistant secretary of the Department of the Air Force, said the location was not available “because it conflicts with HARB’s Live Ordnance Loading Area and the Florida Air National Air Guard Alert facility.”

The Air Force recommended that the county use a different offsite location on the northeast side of the airfield. But, as the report from the mayor says, using that location would take too much time and be too costly.

A month later, in March 2020, the county’s Aviation Department asked the Air Force for more time to evaluate the land and in June 2020 sent a second letter indicating an alternate site on the southeast side of the Homestead base that is owned by the Air Force.

Because the Air Force owns the land, the county wouldn’t have to buy farmland, rezone the land or modify the county’s Comprehensive Development Master Plan, the report from the Aviation Department said. Additional locations were also submitted, although the department didn’t prefer them because they would require buying private land.

The proposed fixed base operator would be used for activities such as corporate, private cabin class turbine jets, propeller aircraft and cabin class helicopters. But since the location of the development site has not yet been determined, the Aviation Department report does not include the costs related to development of the site and “all available legal funding sources have yet to be determined”.

Greg Chin, communications director of the Miami-Dade Aviation Department, told Miami Today via email that “the Air Force has not notified us when we may get a response.” On its end, he wrote, the county has already delivered its proposals and is just awaiting a green light from the Air Force to explore the details of a fixed-base operator at Homestead.