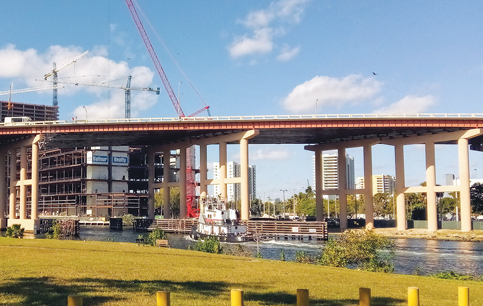 With a state lawsuit imminent, Miami-Dade commissioners Tuesday rushed to fill five board seats of MDX, the county tollway agency whose life has hung in legal limbo for nearly two years.

Commissioners debated almost an hour conflicting resolutions by Mr. Diaz and Joe Martinez. Both aimed to reestablish quorum on the nine-seat board before July 1, when Gov. Ron DeSantis will name a fifth member to GMX, the agency the state created in 2019 to grab control of MDX’s five toll roads.

A fifth seat would give the state a majority on the GMX board, where Miami-Dade already has less power than it did with MDX, including a provision that the state can veto some tolls spending.

Mr. Diaz’s item, which won 9-3, was expedient at the cost of transparency, waiving background checks on MDX appointees, who are to serve four years. Under Mr. Martinez’s item, commissioners would have nominated board members to be vetted by ethics commission head Jose Arrojo.

“We have the chance for a new beginning, to start fresh and show everybody we’re doing it transparently,” said Mr. Martinez, who was on Mr. Diaz’s appointees list but declined.

Mr. Diaz, who substituted a reluctant Mr. Monestime, argued time was short. A state lawsuit, he said, could come at any time in response to an ordinance the county passed this month that invoked its constitutional home rule rights in abolishing GMX and resurrecting MDX.

In March, an appeals court tossed MDX’s lawsuit against the state to block its replacement with GMX. MDX’s lawyer, Gene Stearns, told Miami Today then that he planned further legal action.