Advertisement
The Newspaper for the Future of Miami
Connect with us:
Front Page » Profile » Hilarie Bass: Leads UM’s board, her institute for diversity/inclusion

Hilarie Bass: Leads UM’s board, her institute for diversity/inclusion 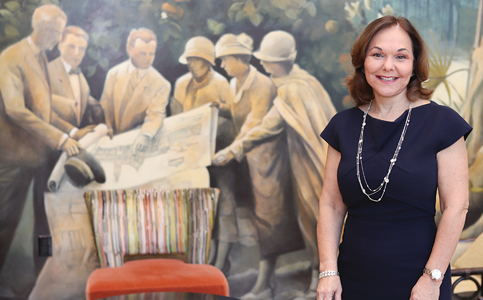 When Hilarie Bass joined Greenberg Traurig as an associate fresh out of the University of Miami School of Law, the firm had 72 lawyers and just one office, in Miami.

In late 2018, when she left the practice as the firm’s co-president 35 years later, it had grown to boast 2,000 attorneys staffing 39 offices around the globe.

“I’d like to think I had something to do with that trajectory,” she said.

Ms. Bass during her last year at the firm also served as president of the American Bar Association (ABA), one of the largest volunteer professional membership organizations in the world.

In that role, she traveled to 65 cities in 25 countries spearheading initiatives on immigration reform, legal ethics and the future of legal education – closing the gap between what law students are taught in school and tested for on the bar exam, and what law firms expect of them once they graduate.

Another major focus, she said, was a research project to find an answer to a startling statistic: For roughly the last 30 years, while women have represented roughly half the graduating classes of law schools nationwide and are hired at about the same ratio, they subsequently leave the profession in significant numbers.

“By age 50, we’re down to about 26% [of the legal workforce],” she said. “Many women practitioners could tell you why that is. But anecdote doesn’t change policy; data does.”

The project, which included focus groups, surveys of the top 200 law firms and discussions with managing partners, senior women still in the practice and those who left.

“None of the conclusions were a big surprise, but it convinced me we’ve made surprisingly limited progress,” she said. “That bothered me.”

So she decided to do something about it. After her yearlong term as ABA president ended, she resigned from her firm and founded the Bass Institute for Diversity and Inclusion, which works with top company and law firm leaders to develop strategies to retain and elevate more women and minorities to senior management positions, as well as foster diversity and inclusion at every level.

She also remains close to a valuable source of new legal and business talent. In May, she became just the second woman in the University of Miami’s history to become chairperson of the school’s board trustees.

She’d previously served as vice chair and has been a member of her alma mater’s board since 2005.

“If you look at our board members, you’ll see tremendous representation from the business community,” she said. “We’re always looking for great people who are committed to the university and spending the time to help make it the great institution we believe it is.”

Ms. Bass sat down with reporter Jesse Scheckner. The interview, recorded by Jahmoukie Dayle, can be viewed below.